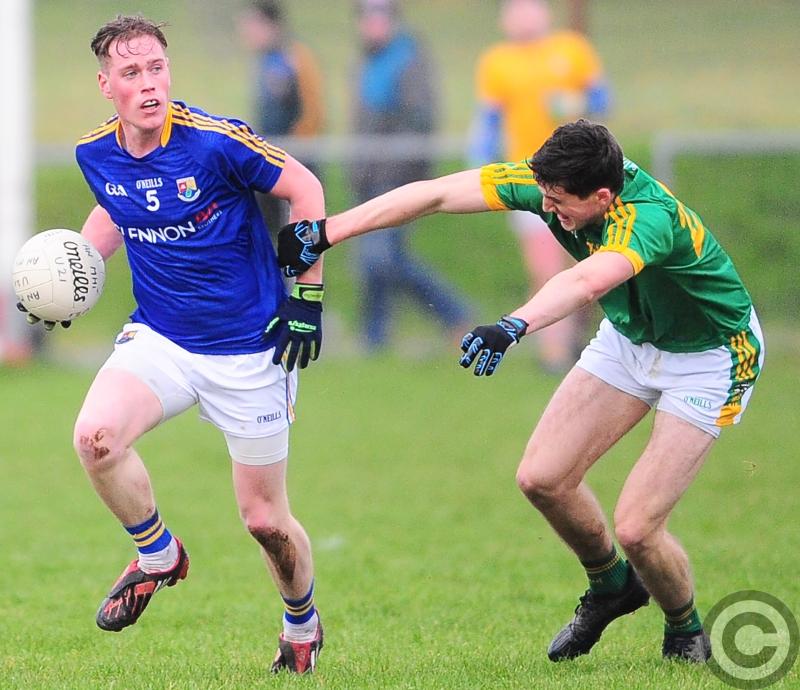 Cian Brady on the ball for Longford against Meath in the Hastings Cup U-21 Football Tournament Final at Lynch Park, Abbeylara on Sunday. Photo: Declan Gilmore

Many missed chances cost Longford the opportunity of a title triumph as they ended up losing by the narrow margin of two points against Meath in a highly entertaining Hastings Cup Under 21 Football Final that was eventually decided after extra-time in front of a big crowd at Lynch Park, Abbeylara on Sunday.

While Longford got off to a great start with a goal from a penalty converted by Nigel Rabbitte in the 5th minute, they trailed by the minimum of margins at the break (1-5 to 1-4) with Conor Moriarty scoring the Meath goal in the 29th minute.

Prominent midfielder David McGivney fired over three of the Longford points (two frees) in the first half with Conor Berry also on target while the other Meath scores were registered by Moriarty (free), David McLoughlin (3) and Thomas O’Reilly.

It continued to a be a tight affair in the second half and thanks to a brace of points apiece from McGivney and Rabbitte, with Robbie Clarke also on the mark, Longford led by 1-9 to 1-7 with time running out.

Meath then struck for a second goal through David McLoughlin to hit the front in the 56th minute, followed by a point from Sean Reilly, but two scores deep into the lengthy stoppage time from Conor Farrell and Shane Kenny snatched a last gasp draw (1-11 to 2-8) for Longford, the latter landing a pressure ‘45’ with the last kick of the game.

But Frank McNamee’s side pressed the self destruct button in shooting four wides in succession in the early stages of the extra-time period and were outscored 1-2 to 0-3 by Meath thereafter with David McLoughlin getting the decisive third goal for the visitors.

There were very late chances for Longford to salvage the situation with goal attempts falling to Robbie Clarke and Aidan McElligott (the Mullinalaghta man blasting the ball over the bar for a point from a very tight angle) but Meath managed to keep their net intact in holding out for a hard earned success.