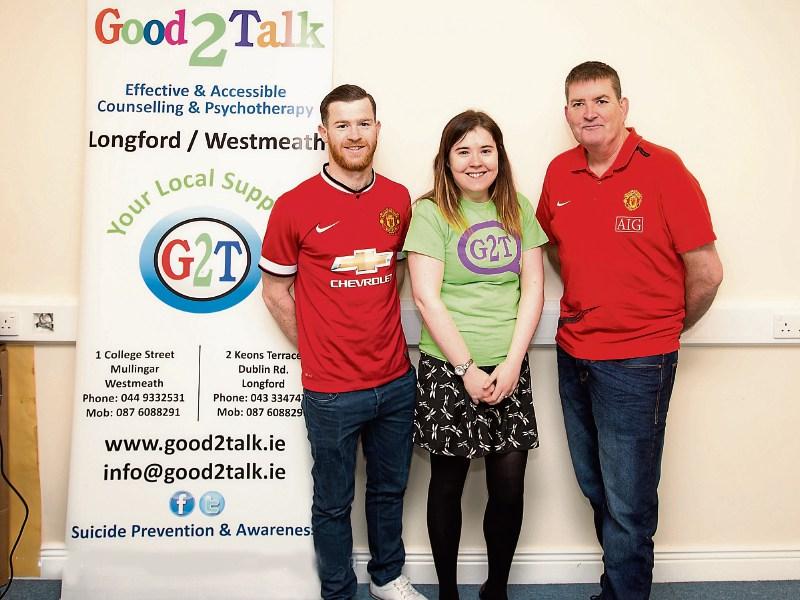 S&K Football Banter, is a Facebook group set up by John Moran for locals in Longford town that are fans of various English football clubs.

As you can imagine, Manchester United and Liverpool are always well represented, with John, himself being a Crystal Palace Fan.

Someone on the page suggested staging a football match between the two sets of fans. Some of other clubs fans joined in to add to the numbers to the two teams. The first Inaugural match was held over the Christmas period in the Mall Complex Longford Town and it was sponsored by Chevuebelle Hair Salon. Manchester United won on penalites 5-4.

The game itself finished up 2-2.  All monies raised went to a local charity Good2Talk, which as it stands, was nearly €1,000. The match itself was an evenly contested affair.

United, it has to be said were deserving winners. After a shaky start they composed themselves and were better team. The had numerous chances to win  the game in normal time, to prevent it from going to penalties.

In saying,  the Man United's goalkeeper had to pul off a couple of great saves, to deny Liverpool's Paul Doherty.

When it really should have been finished off a lot ealier. the midfield duo of Stephen Norton and Niall Kelly ran the midfield from start to finish.

Frankie MacMahon, and the United  keeper performed impressively for the winners, alongside captain fantastic Declan Dolan and Gordon Burke. On the Liverpool side, Paul Doherty, was a star player, Sean Murphy, Gary Hewitt (minus the penalty miss) and Gary Cullen, and captain Darren Belton all stood out.

But 'all' 'on both sides played thier part, and gave the crowd a great feast of football, and end to end stuff.

Well done to all involved and no doubt the charity game will become a permanent tie on the already hectic  S & K football seasonfixture calendar.