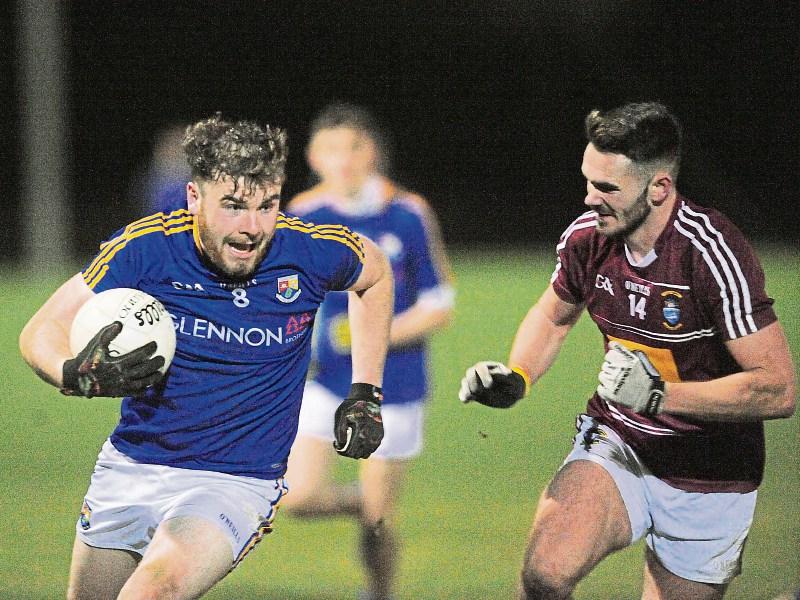 Although not at full strength with the Mullinalaghta players on the panel rested, Longford were the better team for the majority of the Hastings Cup Under 21 Football Tournament first round clash against Westmeath at the Tubberclair grounds on Tuesday night of last week but had to settle for a draw in the finish.

As it turned out, Longford had to depend on the impressive Shane Kenny (who clocked up a total of 1-6) to avoid defeat with the Lanesboro lad firing over a free for the equalising score in the second minute of stoppage time but this was a game the visitors should have won as they let a four point lead slip from their grasp.

While Westmeath got right back into contention with a goal from a penalty converted by Ronan O’Toole midway through the second half, followed quickly by a point from Boidu Sayeh to leave the sides all square (1-10 to 1-10), Longford regained the lead with a point from Nigel Rabbitte in the 54th minute.

Substitute Cillian Lee then increased the advantage when he landed a cracking point in the 58th minute but Westmeath hit the front when Ronan O’Toole broke through to blast the ball to the back of the net in the final minute of normal time.

That was a severe setback for Longford but Shane Kenny came to the rescue with his late point. And Frank McNamee’s side should have been awarded another free close to the Westmeath posts when Cian Brady was clearly fouled right on the stroke of the full-time whistle but Offaly referee Chris Dwyer failed to punish the tough tackle.

Longford were furious and particularly Conor Berry who lost his cool in remonstrating with the match official, resulting in a red card for the Abbeylara player. The powerful pairing of Berry and Shane Kenny gave their side a decisive edge at midfield with centre-half-back Dessie Reynolds also most prominent.

Attacking wing back Eoin Higgins created the opening for Kenny to score the Longford goal with just four minutes gone on the clock and while Westmeath came storming back to register four points in a row through Shane Clavin, Tye Adamson (2) and Boidu Sayeh they ended up trailing by 1-7 to 0-8 at the break.

Conor Berry, Shane Kenny (three frees), a brace from Daniel Smith (free and play) and Nigel Rabbitte accounted for the Longford points in the first half and a couple of great scores (play) followed from Kenny on the changeover, the second a brilliant strike in the 38th minute.

A point apiece were then exchanged between Boidu Sayeh (free) and Conor Berry with Longford apparently in a comfortable 1-10 to 0-9 lead but Westmeath hit back to score two goals in almost stealing a win, only for the Shane Kenny free to level matters with time running out.