Padraig and Sean McCormack back in action for Longford 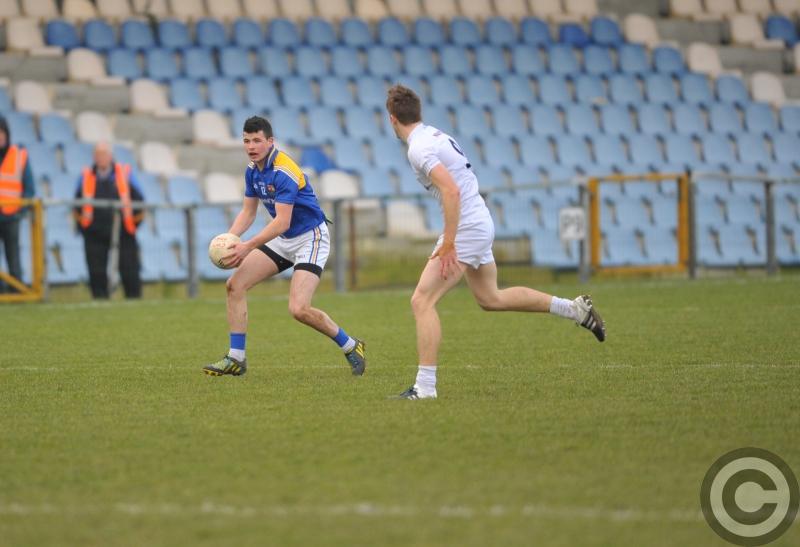 Barry McKeon on the ball for Longford against Kildare opponent Kevin Feely in the National Football League Division 3 game at Glennon Brothers Pearse Park last February. Kildare won by 2-11 to 0-10.

Always regarded as a good build-up to the matches that really matter in the National Football League, Longford head for Newbridge next Saturday for the new season opener against Kildare at St Conleth’s Park, throw-in 2pm.

The hard work has already started for the manager Denis Connerton and his fellow mentors in preparing the  players for the first competitive fixture in 2017 and the good news is that the McCormack brothers Sean and Padraig are back in the county squad that is boosted by a strong Killoe presence. Unfortunately, another Emmet Og clubman Michael Quinn is out injured until March at the earliest.

Taking on Kildare  is always a difficult task, and particularly so in Newbridge with the enthusiastic home support,  so Longford will be hard pressed to make a winning start in the bid to repeat the fine form they showed in last year’s O’Byrne Cup.

The high of beating Dublin 1-12 to 0-9  in the semi-final at Glennon Brothers Pearse Park was followed by the low of losing 1-17 to 1-11 to Meath in the title decider at Pairc Tailteann, Navan and the subsequent setback away to Offaly in Round 1 of the National League.

The so competitive Division 3 is, once again, a real minefield this season with tough opposition in relegated Armagh (home) and Laois (away) along with last year’s beaten All-Ireland semi-finalists Tipperary (away).

While it is always a positive to make progress in the O’Byrne Cup, the focus will be firmly fixed on the opening National League game at home to Offaly on Sunday February 5 in the battle to collect two vital points in order to ease the pressure of early relegation worries.

The following week Longford are away to Louth (promoted from Division 4) and their other Division 3 fixtures are against Sligo (home) and away to the other promoted side Antrim in the final round.

The 2017 O’Byrne Cup will represent the first time that supporters see the newly introduced ‘Mark’ being used at senior football level and it has been decided to have no limit on the number of substitutes allowed in the Leinster pre-season tournament.

Following the game  against  Division 2 outfit Kildare in Newbridge, Longford will complete their fixtures in Group 2 of the O’Byrne Cup at home against Offaly (Wednesday night January 11) and IT Carlow (Sunday January 15) in the battle for a semi-final spot.