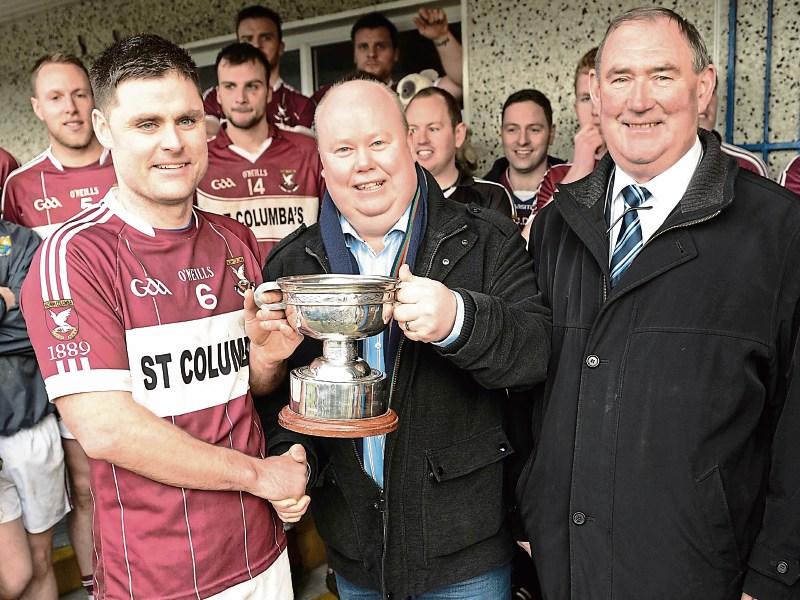 On Sunday last  Shane Mulligan joined an elite list after he captained Mullinalaghta to victory in the Leader Cup Final against Clonguish to go along with the Connolly Cup he collected when St Columba’s won the Senior Championship title back in October.

It has been a remarkable year for the Mullinalaghta club who claimed their first senior championship in 66 years, reached the Leinster Club semi-final and have now won another Leader Cup title.

Speaking to the Leader Mulligan said: “This year topped it all. It’s fantastic. We have reached some almighty heights and this was an absolute ding-dong battle against Clonguish. It was as good a tussle as we have been in. It looked right at the end that we had lost it but we managed to snatch a draw. We are delighted to get the two cups out to Mullinalaghta.”

Despite being ahead by four points in the second half, Mullinalaghta needed a last minute point from David McGivney to bring the game to extra-time. Mulligan paid credit to Clonguish for playing their part in a great game.

“It looked like it was going away from us. Clonguish played some fantastic football and they hung in there. When it went to extra-time there was questions to be asked and we had the answers.”

It has been a long but very satisfying year for Mullinalaghta and Mulligan praised manager Mickey Graham for what he achieved with the north Longford side.

“Mickey just fit like a glove with all the lads and the people of the parish. He has great time for us and we with him. Right from the start it clicked and we have reaped the rewards. He is a fantastic manager and we are delighted to have him.”

Shane is in the twilight of his career but certainly not showing it, although he admitted he felt the side effects of it after extra-time on Sunday. This year was surreal for the experienced defender who wondered if he would  ever get his day in the spotlight.

“It was one of those things that you wonder will it ever happen for us when you looked at the other clubs achieving success. I am  just delighted that 2016 can be marked down. It’s done and dusted now. The Leader Cup and Senior Championship are two of the three main senior competitions and we won two of those titles.  I am in the twilight of my football career and this year can be chalked off as a fantastic season. Coming into this weekend we wanted the win the Leader Cup to make sure that we finished the year the way we felt we deserved.”