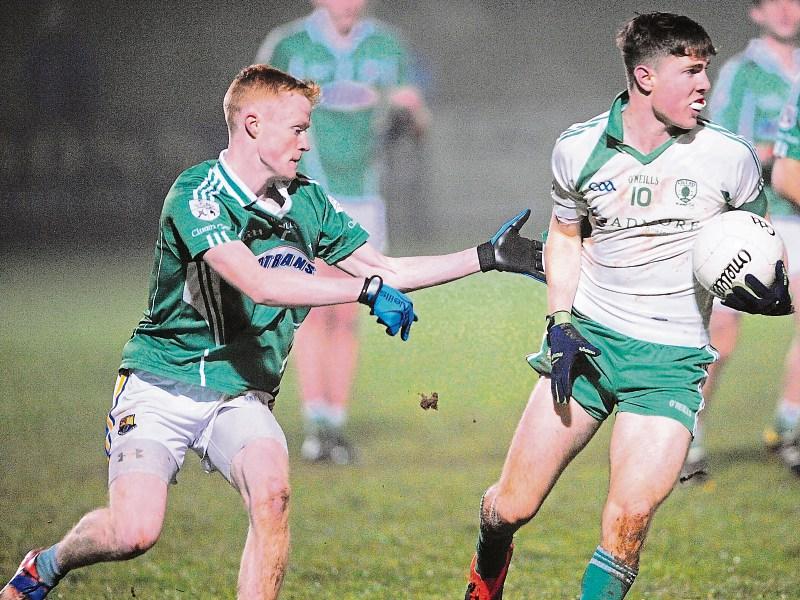 Emmet Og have enjoyed a terrific record in the Under 21 ‘A’ Football Championship in the recent past and the current Killoe side cruised to a most emphatic win over Clonguish in the county final at Allen Park on Saturday evening last.

Dominant in most positions on the pitch, Killoe recovered from the setback of failing to convert a penalty in the 9th minute when Larry Moran’s kick was well saved by opposing keeper Declan McKenna but the Clonguish netminder was caught out twice as he conceded a couple of crucial goals in the closing stages of the first half.

Confident Emmet Og had established a comfortable 0-6 to 0-2 advantage before they scored their first goal in the 26th minute when a long ball in from Paddy Kiernan was flicked over the line by Shane Mahon in a tussle with McKenna.

It got even better for Killoe in the 29th minute when Ciaran Donohoe burst his way through to fire a shot to the net and Clonguish were now in serious trouble as they trailed by 2-6 to 0-4 at the break.

Five of the six Emmet Og points in the first half came from the accurate full-forward Donohoe who ended up with the tremendous total of 2-7 (three frees) in playing a leading role in Killoe’s fourth U-21 championship title triumph in the space of six years with corner-back Conor Moran and midfielder Brian Harte also very prominent.

Commanding full-back Liam Hughes and impressive midfielder Paddy Kiernan (who landed a marvellous point in the first half)  made a major impact for the easy winners, with wing forward Larry Moran always a threat whenever he got on the ball, and it was a well polished team performance by a much superior Killoe side managed by Declan Rowley.

The four Clonguish points in the first half were registered by Alan Sorohan (first minute), Colin Farrell, Colin Clarke and Alan Gregg (free) and the latter was on target from another free to close the gap immediately on the changeover.

Back came Emmet Og with a good point from Larry Moran and they then struck the killer blow when a shot from Jamie King found the back of the net with three minutes gone in the second half.

Further scores followed from defender Liam Hughes (who surged forward to land a great point), Jamie King (2), Ciaran Donohoe (2) and Paddy Kiernan while Donohoe got clean through to register another goal in the 47th minute as things went from bad to worse for Clonguish.

Killoe were now in a runaway 4-13 to 0-7 lead, with the couple of Clonguish points coming from Alan Gregg (free) and Colin Farrell (free), and it was corner-forward Gregg who accounted for three more consolation points.

Emmet Og had the last say when Larry Moran shot over the bar in final minute of normal time and they were generally in complete control with the decisive two goals before the break shattering whatever hopes Clonguish had of springing a surprise.