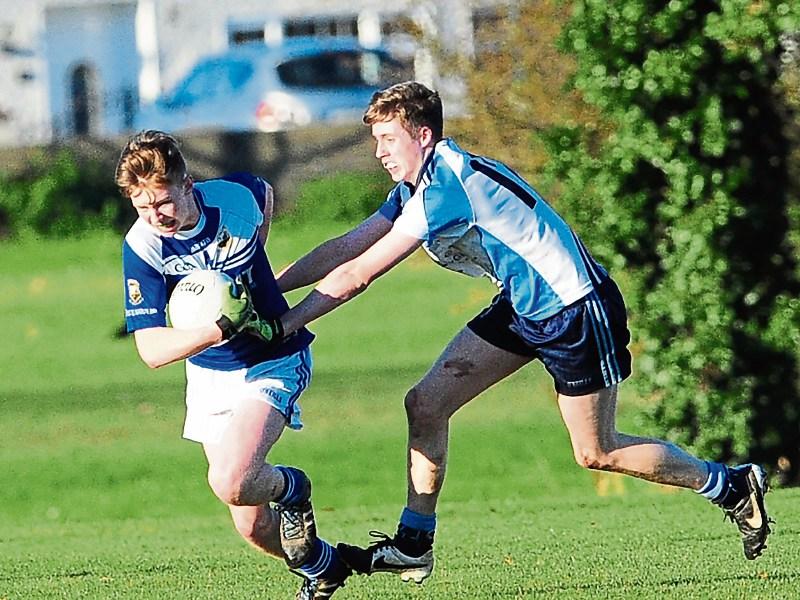 After struggling to compete with a physically strong Maynooth side for most of the first half, St Mel’s gradually got on top on their way to winning the opening game in the Leinster Post-Primary Schools Senior ‘A’ Football Championship and now meet St Aidan's Whitehall in the second round clash in Dublin  this Friday.

The excellent redeveloped pitch at the college grounds was the venue for the first round clash on Wednesday last and from the moment impressive wing back Brian Harte got through to fire home a well-taken goal on the stroke of half-time the momentum was with St Mel’s who produced a much improved performance on the changeover.

The decisive Harte goal, created by full-forward Dylan Smith, left St Mel’s in a rather fortunate 1-3 to 0-3 lead at the break but they pulled away in the second half and had the comfortable margin of ten points to spare in the end.

It was a historic first ever Leinster Senior Championship game played on home ground in the college and while the Maynooth side won a lot of possession in the first half they were guilty of some very poor finishing in failing to convert this superiority into vital scores.

The visitors hopes were eventually dashed when St Mel’s corner-forward Darragh O’Connell fired home a couple of well-taken goals in the second half. O’Connell was on target in the 40th and 47th minutes to clinch the victory, although the final scoreline was certainly not a true reflection on the actual trend of the match.

The opening score did not materialise until the 13th minute when Daire O’Brien linked up with Brian Harte, who raced through to land a fine point.

But St Mel’s had a lucky escape when their keeper Declan McKenna produced a great point-blank save to prevent Jack Foley scoring a goal for Maynooth in the 20th minute.

After all their missed chances, the Co Kildare school eventually opened their account with a point from Niall O’Sullivan in the 22nd minute but St Mel’s hit back with a brace of scores in quick succession through Cian Dooner and Padraic Halpin.

Maynooth levelled matters with a point apiece from O’Sullivan and Kevin Dunne before they suffered a significant setback when Brian Harte (who really stood out) shot to the back of the net to give St Mel’s a crucial advantage going into the second half.

Points were traded twice early on the resumption, with Darragh O’Connell and Cian Dooner (free) on target for the home side, and then O’Connell scored a cracking goal for St Mel’s after receiving the ball from his brother Robbie.

Further St Mel’s points followed from Cian Dooner (a terrific strike) and Robbie O’Connell (free) and then Darragh O’Connell got another goal in the 47th minute to put the issue beyond all doubt as the Longford college now held a commanding 3-7 to 0-6 lead.

Moments later another tremendous save by netminder Declan McKenna kept out a goalbound shot as Maynooth attacker Jack Foley was denied again but to their credit the gallant losers did close the gap with a couple of consolation points from Braden Miller and Foley.

St Mel’s were not finished yet and closed out the game with a point apiece from Robbie O’Connell (free) and Gerard Flynn in the final few minutes to complete a good team effort in the second half and they will be quietly confident of making further progress in the championship.