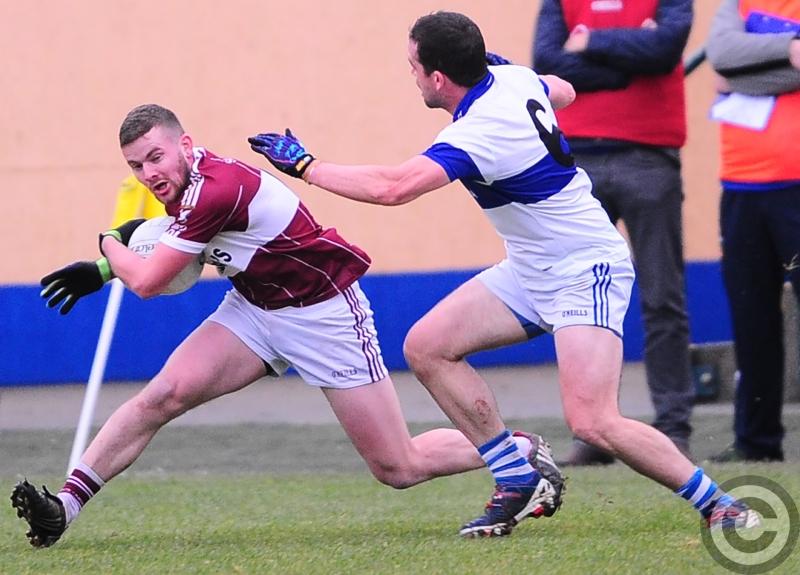 James McGivney on the ball for Mullinalaghta in his bid to find a way past St Vincent's defender Ger Brennan. Photo: Declan Gilmore

Mullinalaghta failed in their bid to become the first team from Longford to reach the Leinster Club Senior Football Championship Final but they made it really tough for the red-hot favourites St Vincent’s in front of a big attendance at Glennon Brothers Pearse Park on Sunday.

After kicking five wides in the first half, St Columba’s ended up trailing by 1-7 to 0-8 at the break with Tomas Quinn scoring the crucial goal midway through the first half after connecting with the perfect pass from Enda Varley with Dublin All Star Diarmuid Connolly the creator in this slick attack.

Former Mayo footballer Varley fired over two points for St Vincent’s in the first half while on target for Mullinalaghta were Jayson Matthews (two frees), James McGivney, Shane Mulligan, David McGivney (free) and Gary Rogers along with a brace from the excellent Rian Brady who was popping up all over the pitch in a roving corner-forward role.

15 minutes were gone in the second half before the next score materialised and that went to Mullinalaghta with Gary Rogers shooting over the bar to leave just the minimum of margins separating the sides.

But St Vincent’s were gradually getting on top and after Shane Carthy was denied a goal when his shot struck the post in the 39th minute, the scores eventually began to flow again for the Dublin champions with the introduction of a number of substitutes making a big difference.

Diarmuid Connolly landed a magnificent point from a tight angle in the 47th minute and a further couple of scores followed from Shane Carthy and replacement Albert Martin to open up a decisive gap.

David McGivney fired over two frees to keep St Columba’s in contention but St Vincent’s struck the killer blow in the 59th minute when Shane Carthy scored their second goal to clinch a Leinster final showdown against Offaly opponents Rhode.

With time almost  up, it did not matter when St Columba’s midfielder John Keegan was sent-off after clashing with Diarmuid Connolly.

Although St Vincent’s were guilty of shooting a total of eight wides in the second half, they did not deserve to win by seven points in the end and the final scoreline was rough justice on the gallant Mullinalaghta side who can feel very proud of their progress to the provincial semi-final against the odds.