Killoe pip Colmcille to reach yet another under 21 'A' Final 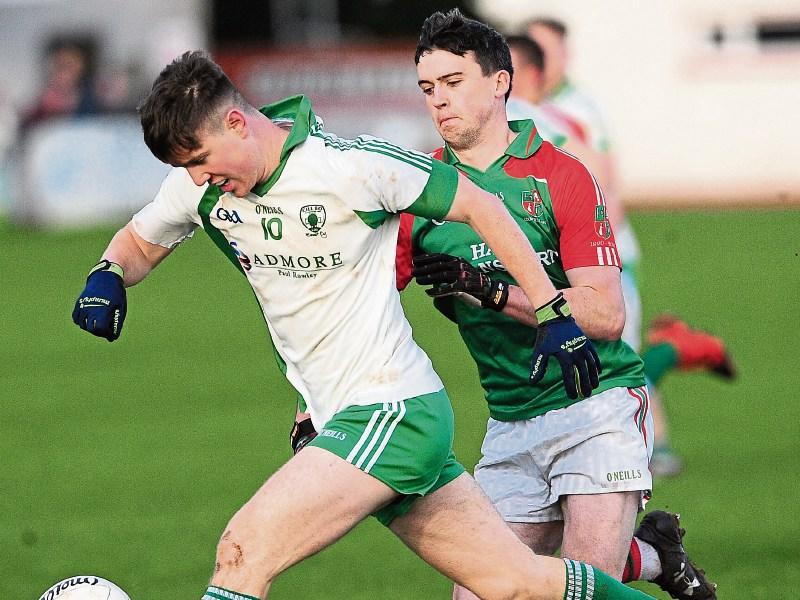 A free converted by Jamie King deep into stoppage team saw Killoe emerge victorious and reach yet another U-21 ‘A’ Football Championship Final and in doing so they gained revenge for the defeat by Colmcille in last year’s title decider.

For most of this semi-final clash at McGee Park on Sunday last there was nothing between the sides but as normal time was drawing to a conclusion Emmet Og had opened up what appeared to be a  comfortable  four point advantage.

At this late stage Colmcille decided to move Fergal Sheridan into full-forward and in the space of one minute he got his side back on level terms with a goal and a point but Killoe snatched the winning point when a free, brought forward for dissent, was fired over the bar by King.

Colmcille were left to wonder what would have happened if they had moved Sheridan in earlier to full-forward.

In the few minutes he was operating in the role of the target man he gave Liam Hughes a tough time as up until then the Emmet Og full-back was rarely troubled.

Colmcille started brightly and two points from Fergal Sheridan (one free) gave them an early lead inside the opening five minutes. Killoe got their opening point in the 8th minute through Ciaran Donohoe.

cleared off the line with King latching on to the loose ball to land a point and level matters. Points were then traded between Rory Hawkins and Donohoe (free) before another Sheridan free edged Colmcille ahead again in the 24th minute.

Two neat points from Shane Mahon put Killoe in front for the first time by the 26th minute but they had a lucky escape when Liam Hughes did very well to block Cathal McCabe’s goalbound effort.

Just before the break Mahon was on target again to give Killoe a two point advantage; 0-6 to 0-4.

Inside the opening 10 minutes of the second half Colmcille were level with Cathal Reilly firing over two excellent points before Shane Mahon gave Killoe the lead again in the 41st minute. Another Jamie King free restored their two point advantage in the 44th minute.

It looked all over with Killoe leading by 0-12 to 0-8 but Colmcille battled back to leave the sides all square. In the 60th minute a high ball into the Emmet Og square was met by the fist of Fergal Sheridan as the ball went over the bar and soon after the same player found the back of the net with a fine finish from a tight angle.

Extra-time was looming before Killoe were awarded a free and Jamie King made no mistake  in slotting over the winning score deep into stoppage time.