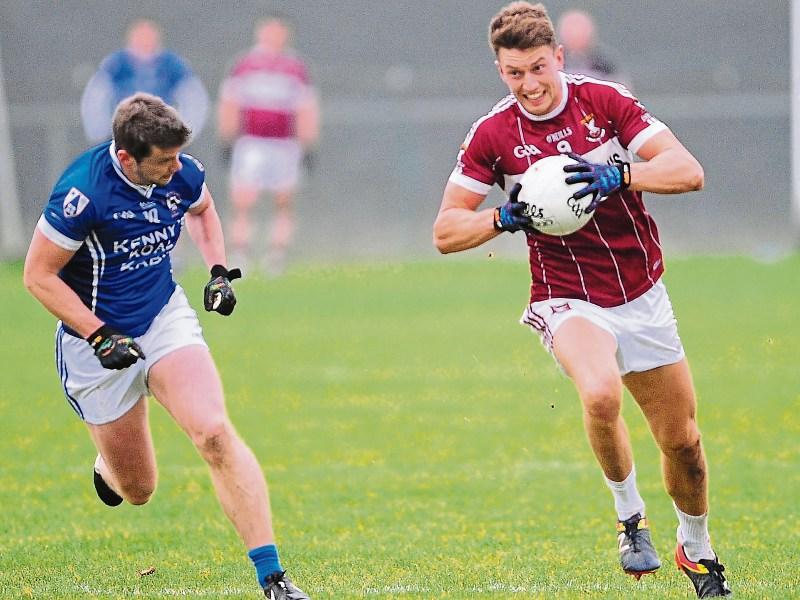 Mullinalaghta were still on the pitch doing their warm up exercises at 3 minutes to 2.

Two o’clock came and passed, with no sign of letting up - although the exercise was very leisurely. Some apparent urging came from the mentors, but still Mickey Graham persisted and continued on. I got the strangest feeling that this was a deliberate ploy to keep the team mentally occupied, so they’d start the game without nervousness. They kept doing the exercise until 2.06, when the team assembled and proceeded to walk as one body towards the tunnel. At the same time Loman’s appeared on the field.

They virtually vacated the tunnel as the Mullinalaghta team arrived beside it.

At 2.14 precisely Mullinalaghta arrived onto the pitch, closely followed by the ref and his officials. I was struck by the precision of their arrival. Same time as the ref, almost.

It worked. In this game Mullinalaghta got involved straight away and looked dangerous from early on - as distinct from other games in the competition where they looked nervous and rattled for awhile.

It was a tough demanding game, marked by several James McGivney signature points, and wonderful winning of possession in the full forward line. David McGivney too, was as usual reliable, and ended up with several scores, most from placed balls.

Mullinalaghta have become cute too.

In the first half, Loman's were almost ready to take a kick out, waiting for the ref, when Aiden McElligott took the tee and casually trotted with it back to the net, and threw it inside. The goalie had to follow and gather it again.

By the time he was ready Aiden was in the midfield area, and the result of the kick out was that Mullinalaghta won it, and resulted in a point.

This was a big win, again confounding the population experts. Loman’s are a town team with all that means. Population, resources, and facilities.

Next up is St Vincent's who will bring another level of physique and power.

But Mullinalaghta are a serious team, who play with composure and temperament.

Once, in the second half, three of their defenders simultaneously lost their concentration and focus, and Loman's flashed through the open space to land the game’s only goal.

I'd hate to see it happening against St Vincent's.