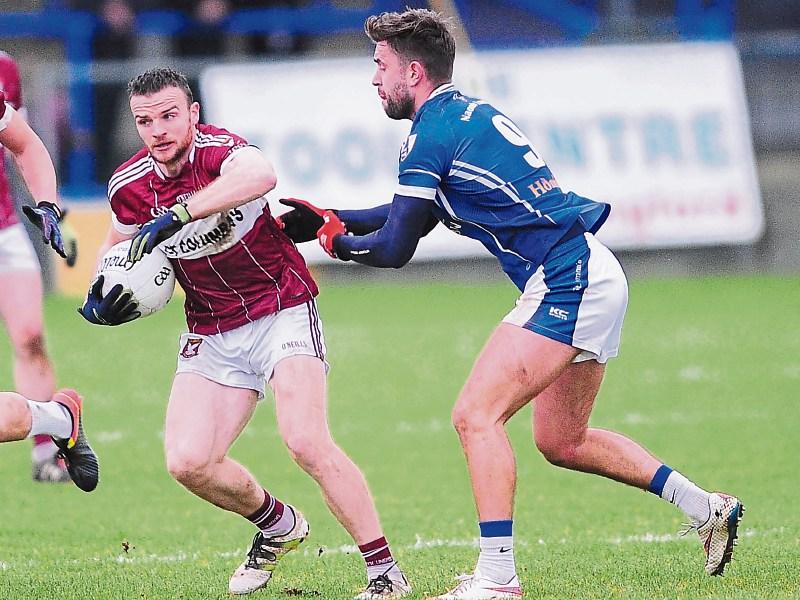 A brilliant year got even better for Mullinalaghta as they managed to master the fancied Westmeath champions St Loman’s Mullingar in making it through to the Leinster Club Senior Football Championship semi-final and the star of the show in this terrific win was the outstanding James McGivney who fired over five points - all from play.

A wonderful achievement by St Columba's who showed great character to survive this stern test and while the odds will be stacked against them when they take on the might of the Dublin giants St Vincent’s on Sunday November 27th, home advantage is a definite plus as they welcome Diarmuid Connolly and the Marino team to Glennon Brothers Pearse Park.

Winners of the Longford senior football title for the first time in 66 years, mighty Mullinalaghta are now enjoying a remarkable maiden voyage at Leinster senior level and have earned the proud distinction of becoming only the fifth team from the county to reach the penultimate stage of the premier provincial club competition.

An attendance in the region of 1,500 gathered at Pearse Park in damp conditions on Sunday last to witness another chapter in the glorious St Columba’s success story this season under the guidance of influential manager Mickey Graham.

While James McGivney was very much the main man on the pitch it must be said that keeper Patrick Rogers deserves great credit for producing two vital saves to deny the favourites St Loman’s.

No. 1 really excelled when keeping out a flicked attempt from the same player in the 59th minute, at a stage when St Loman’s trailed by a solitary point, 0-13 to 1-9.

A goal at that late stage would surely have been the end for St Columba’s and they got the final score of the game in the second minute of stoppage time when Aidan McElligott shot over the bar. The game was then held up for six minutes after Kilmurray got injured and was subsequently stretchered off before play eventually resumed.

Mullinalaghta stuck it out to spring a surprise and it will be a sensational shock if they ever happened to beat St Vincent’s who are the current favourites to win the All-Ireland Club title.

That is for another day as St Columba’s can savour a second consecutive home win in the Leinster series and captain Shane Mulligan was a real source of inspiration for the Longford champions alongside the also prominent Donal McElligott and Conan Brady in the most effective half-back-line.

John Keegan enjoyed some good spells at centrefield in teaming up with David McGivney, who played a notable part in the victory in firing over six points (all frees), and he and his brother James (a constant threat at centre-half-forward) accounted for 11 of the Mullinalaghta total of 14 scores.

Rian Brady looked dangerous whenever he got on the ball, even if he failed to get his name on the scoresheet on this occasion,  with Gary Rogers working extremely hard as usual and few can argue with the fact that St Columba’s deserved their      narrow  victory.

The north Longford side created a couple of clear-cut goal chances in the first half with Aidan McElligott having a close range effort well saved by the opposing keeper Stephen Gallagher in the 2nd minute and after squandering a few other chances in a flying start Mullinalaghta fell behind.

St Loman’s corner-forward Shane Dempsey, always a threat throughout the game, shot over the bar in the 5th minute but moments later James McGivney landed a great point to get Mullinalaghta off the mark.

A point apiece was then exchanged between Kieran Kilmurray and David McGivney (free) before St Loman’s got on top to establish a 0-4 to 0-2 lead following well struck scores from Paul Sharry and Shane Dempsey in quick succession and should probably have been further in front as they missed a few other good chances.

That was really putting it up to Mullinalaghta but they came storming back to enjoy their best spell of the game which yielded five points in a row between the 21st and 28th minutes. The accurate David McGivney converted three frees and it was he who set up Jayson Matthews for a great goal opportunity, only for the latter to blast the ball over the bar from close range.

James McGivney landed a great point to leave St Columba’s 0-7 to 0-4 ahead but it was St Loman’s who had the last say in the first half when John Heslin got his opening score in the 29th minute.

Mullinalaghta thus held a slender 0-7 to 0-5 advantage at the break but had a very lucky escape direct from the throw-in at the start of the second half when Patrick Rogers did well to stop a goalbound shot from Kilmurray.

St Columba’s then increased their advantage with a point apiece from David (free) and James McGivney (another superb strike) but St Loman’s got right back into contention with a cracking goal from defender Paddy Dowdall in the 39th minute who raced through after receiving the perfect pass from Shane Dempsey.

That closed the gap to the minimum of margins (0-9 to 1-5) but moments later James McGivney dummied his way past a St Loman’s opponent on his way to landing another top quality score from distance.

The ding-dong battle continued as Luke Dempsey’s side (minus former Offaly attacker Ken Casey)  levelled matters with a brace of points through John Heslin (free) and Shane Dempsey (a great effort in the 47th minute) but Mullinalaghta hit back immediately with the fifth James McGivney point, another gem.

It was all square again in the 53rd minute when John Heslin slotted over a free, only for St Columba’s to regain the lead with a wonderful point from defender Shane Mulligan with James McGivney the provider.

That was a big lift for Mullinalaghta, who showed the greater courage throughout this close encounter, and the lead was extended when David McGivney (free) was on target from a tight angle in the 56th minute.

A great strike from John Heslin (play) quickly followed and St Loman’s then went so close to hitting the front, only to be denied by St Columba’s keeper Patrick Rogers who made a fine reflex save to prevent a matchwinning goal for the Mullingar club.

The tension was almost unbearable and after a Paul Sharry ‘45’ dropped short as St Loman’s went in search of the equalising score, Mullinalaghta launched a decisive counter-attack in stoppage time with wing back Conan Brady surging forward to set up Aidan McElligott for a well-taken point that settled the issue.