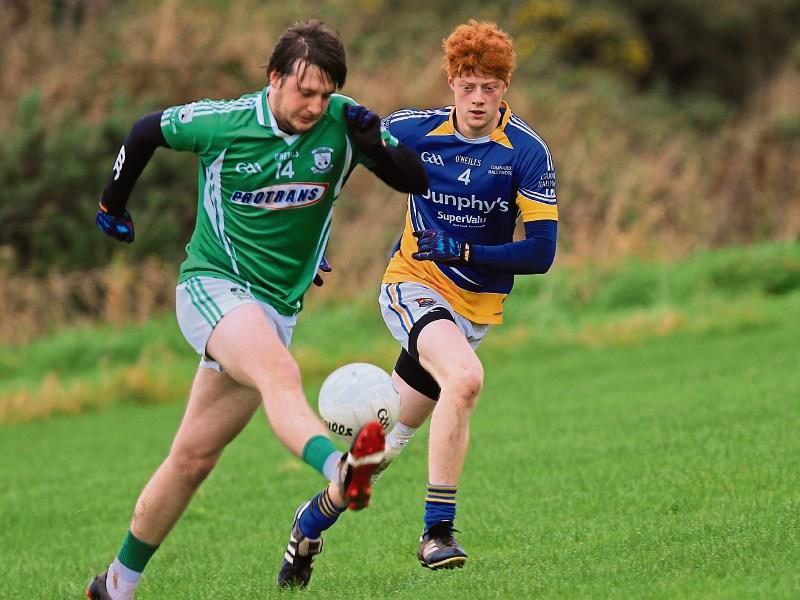 Clonguish booked their place in the Under 21 ‘A’ Football Championship title decider with seven points to spare over Granard/Ballymore in their semi-final clash at the Ballybrien grounds on Sunday last.

Clonguish took control of the game from the start and dominated throughout and it was a much deserved win. Granard/Ballymore were poor by their standards and never got into the game.

The amalgamation squandered a few scoring chances in the game while Clonguish were stronger in attack with Colin Farrell getting the game’s only goal five minutes from the end. It extended the lead to eight points and there was no way back for Granard/Ballymore.

Brian Sweeney got the first score of the game in the 4th minute. Alan Sorohan fired over a great score and then Colin Farrell converted a free to give Clonguish an early three point lead by the 11th minute.

Granard/Ballymore opened their account in the 13th minute with Ciaran Reilly scored a neat point but Clonguish were able to restore their three point advantage in the 15th minute with a nice point from Farrell.

As they continued to dominate the Clonguish side stretched their advantage with three points from Alan Gregg (one free) along with a score from Brian Sweeney.

Granard/Ballymore got a much needed point in the 30th minute through Ciaran Mallon but in first half stoppage time Alan Sorohan shot over the bar to give Clonguish a five point lead going in at the break; 0-9 to 0-4.

Points were traded in the early stages of the second half between Alan Gregg and Eoin Higgins. Colin Clarke then extended the lead to six in the 35th minute but Granard/Ballymore replied with a pointed free from Ciaran Mallon.

Granard/Ballymore knew they needed a goal if they were to get back into the game but wasted a few chances as Clonguish were able to hold firm and keep Declan McKenna’s net intact.

Every time the Granard side got a score, Clonguish were able to reply and pull ahead with Alan Gregg in excellent form. Points from Gregg, Chris Gordon and Colin Farrell gave Clonguish a seven point lead by the 48th minute.

Granard/Ballymore’s only response was two frees pointed  by Ciaran Mallon. The game was over as a contest in the 55th minute when Colin Farrell found the back of the net for Clonguish.

Then moments later Clonguish keeper Declan McKenna pulled off a fine save to deny Granard/Ballymore a badly needed goal.

Granard/Ballymore ended up getting consolation points from Ciaran Reilly and Liam Sullivan (free) while Alan Gregg was on target again with his sixth score of the game as Clonguish ran out comfortable winners in advancing to meet Colmcille or Killoe in the final.