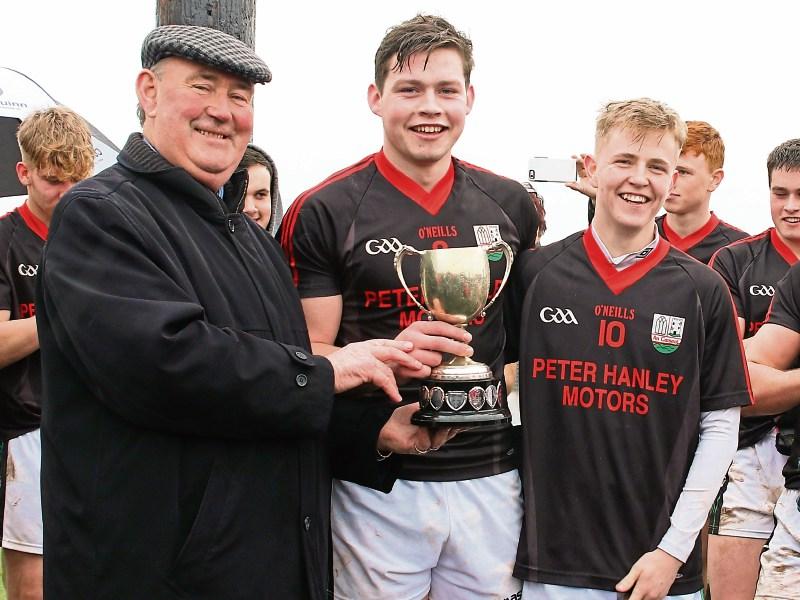 Three goals from Andrew Farrell proved decisive as Cashel/St Brigid’s Killashee got the better of Abbeylara to win the U-21 ‘B’ Football Championship title for the second year in a row.

Farrell got his first goal in the second minute of the final at Emmet Park on Sunday last and added a second in the 40th minute before clinching the win for the amalgamation with a third goal in the 59th minute when there was just two points between the sides.

There had been 10 points between the teams at one stage in the game but credit to Abbeylara for staging a fightback and eventually cutting the gap to two. Both sides ended the game with 14 players; Abbeylara defender Cian Brady was sent off for a second yellow card  in the 59th minute and in stoppage time Michael Burke received a straight red card but it mattered little to Cashel/Killashee  because time was almost up.

Cashel/St Brigid’s made a great start to the game with Andrew Farrell finding the back of the net with just two minutes gone on the clock. Barry McKiernan pointed for Abbeylara two minutes later before the accurate Ronan Healy fired over a free in the 5th minute.

Abbeylara very nearly grabbed a goal in the 6th minute but Russell Brady’s effort somehow failed to cross the line. Healy then kicked over a second free, this time with great precision from off the ground. Ronan added another before Conor Farrell extended his side’s lead to six in the 9th  minute.

Abbeylara got their second point in the 14th minute when Nigel Rabbitte’s ’45 was flicked over the bar by Russell Brady. Conor Berry then saw his effort come off the bar minutes later before Cashel/St Brigid’s went eight ahead in the 21st minute.

Abbeylara replied with a neat point from Barry McKiernan but three points in a row gave the amalgamation a 10 point lead by the 25th minute. Just before the break Abbeylara hit back and points from Conor Berry and McKiernan (two) left them trailing by 1-10 to 0-6 at half-time.

Another free from Ronan Healy left eight between the sides in the early stages of the second half  but in the space of three minutes Berry scored 1-1 to cut the lead to just four by the 37th minute.

The Cashel/St Brigid’s response was terrific with Andrew Farrell catching a neat ball in and sliding his shot  to the net. Abbeylara battled back to  really make a game of it with scores from Nigel Rabbitte (two frees) and Barry McKiernan cutting the gap to four by the 48th minute.

A couple of points from Conor Berry left just two between the sides with two minutes of normal time remaining.

With the momentum now with Abbeylara, the pressure was on Cashel/St Brigid’s but they broke down the field and it ended up with Andrew Farrell scoring a  third goal in the 59th minute to make certain of back-to-back U-21 ‘B’ titles for the south Longford outfit.