Can Mullinalaghta cause upset against St Loman's Mullingar? 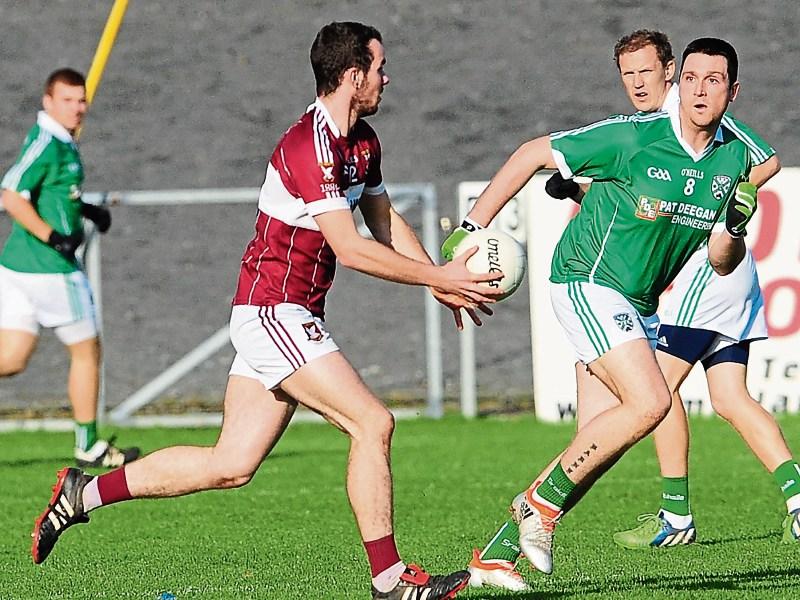 While there was a lot to admire about the Mullinalaghta performance in knocking Stradbally out in the first round, taking on St Loman’s Mullingar is clearly a tougher task but the Longford champions have home advantage again and will be quietly confident of causing an upset.

A semi-final spot in the Leinster Club Senior Football Championship is at stake and a big attendance is expected at Glennon Brothers Pearse Park on Sunday next (throw-in 2.30pm) such is the great rivalry that exists between the neighbouring counties.

St Columba’s landed some excellent scores in clocking up the impressive total of 1-17 on their way to a five points win over Stradbally, who gradually began to struggle when midfielder Darren Maher was sent-off with three minutes gone in the second half.

Having said that, Mullinalaghta were guilty of kicking no less than 12 wides over the hour plus and were worthy winners of a highly entertaining open game of football. Plenty for manager Mickey Graham to be pleased with but the shrewd Cavan native does not need to be told that his side cannot afford to miss so many chances against stronger opposition in the eagerly awaited quarter-final clash.

As their recent record suggests, St Loman’s are a step up with John Heslin the star man and after winning the Westmeath SFC title for the third time in the last four years their sights are now firmly fixed on making a notable impact in Leinster.

Killoe clubman Declan Rowley was in charge when the Mullingar club won the county title for the first time in 50 years back in 2013 and who were narrowly beaten (0-11 to 0-9) by eventual All-Ireland champions St Vincent’s (Dublin) in the provincial quarter-final that season.

Defeated 1-10 to 1-9 by Mullingar Shamrocks in the local derby Westmeath semi-final replay in 2014 with Rowley stepping down, Luke Dempsey was then appointed the St Loman’s manager after finishing up with Moorefield who he guided to Kildare SFC glory two years ago.

The former Longford senior manager made an immediate impact as St Loman’s regained the county crown with a most emphatic 1-15 to 0-8 win over Castledaly in the 2015 final and  who then went on to beat Rathnew (Wicklow) 2-10 to 1-6 in the Leinster Championship before losing out to Dublin opponents Ballyboden St Enda’s in the semi-final.

Ballyboden came out on top by 1-11 to 0-9 on their way to winning the All-Ireland title but St Loman’s have gained valuable experience in competing against the best and that certainly stood to them as they succeeded in winning the Westmeath Championship for the second year in a row.

With Luke Dempsey again at the helm, St Loman’s were hard pressed to topple Tyrrellspass in the title decider a couple of weeks ago and with time running out just a solitary point separated  the sides with a draw looking the likely outcome.

Tyrrellspass had strong claims for a ‘point’ by substitute Philip Sheridan overruled in the 59th minute before influential St Loman’s replacement Ciaran Kilmurray struck the killer blow to score a goal as his side ended up winning by 1-13 to 0-10 in the finish.

Apart from class act John Heslin, other Westmeath players on the St Loman’s team are Paul Sharry and Shane Dempsey along with former Offaly forward Ken Casey. It looks like Heslin will be linking up with Sharry in a powerful midfield pairing while Dempsey and Casey are the dangermen in the full-forward-line.

Dempsey fired over seven points in the recent county final and has the ability to pose a serious threat for the Mullinalaghta full-back-line while dual player, Clonkill and Westmeath hurler Paddy Dowdall, is a commanding figure at centre-half-back for the well balanced St Loman’s football team.

While John Heslin will take some stopping if he clicks into top gear, there is no real pressure on St Columba’s who are entering bonus territory but they will believe that further progress could be made in the fierce desire to earn a crack against the Dublin champions St Vincent’s  or Palatine (Carlow) in what would be a home semi-final on November 27th should it materialise.

No matter what happens against St Loman’s it has been a magnificent year for the Mullinalaghta club and after getting the taste of a historic first win in the Leinster SFC they will be hungry for more success.

St Columba’s have the scoring power in the bid to spring a surprise with a lot depending on a proper supply of the ball into the full-forward-line of Rian Brady, Aidan McElligott and Jayson Matthews who are capable of causing considerable damage in this most intriguing contest.