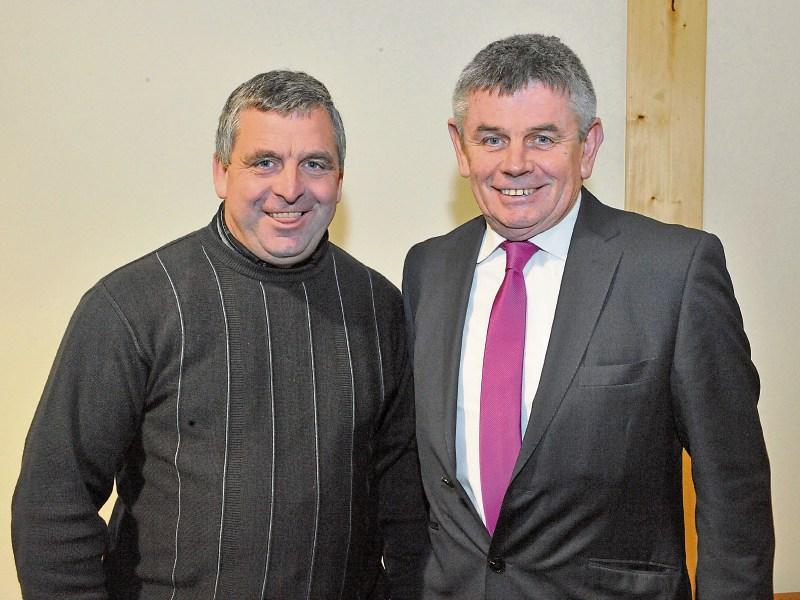 While the international spotlight has been dominated by the Hillary Clinton versus Donald Trump 58th US Presidential mudslinging battle which culminates - or maybe it won’t! - with next Tuesday’s vote, local GAA aficionados are firmly focused on February’s vote to determine the identity of the Association’s 39th Uachtarán.

Never one to be backward in coming forward, Longford’s Martin Skelly, a vastly experienced administrator, was first out of the traps to declare his candidacy to succeed the 38th President,  Aogán Ó Fearghaíl, and last December he was formally nominated to contest the election for high office by Longford County Board Chairperson Brendan Gilmore at annual convention in Abbeylara.

“As a Cashel club man and a proud Longford Gael, I am both humbled and honoured that Longford County Board GAA has seen fit to nominate me for election to the position of the President of the Association,” remarked Mr Skelly at the time.

Seán Walsh (Kerry) and Frank Burke (Galway) have also publicly declared their intention to contest the Presidency which will be voted upon by delegates at GAA Congress next February in Croke Park.

Other high profile potential candidates include John Horan (Dublin) and Robert Frost (Clare) but neither has yet made any formal announcement. Wexford’s Sheamus Howlin is also believed to be considering throwing his hat into the ring.

Drumgoon Éire Óg’s Aogán Ó Fearghaíl is the first Cavan man to serve as GAA President and in the 2014 vote to decide the identity of the President-elect he defeated Seán Walsh and Sheamus Howlin.

Skelly wrestled with his conscience prior to deciding not to contest that particular vote. There were no such doubts on this occasion, however.

And his election bid ratchets up significantly this week as on Thursday, November 3, Cashel club are hosting a night of entertainment, Oíche na gClub, to coincide with the launch of his campaign for election as the 39th Uachtarán Chumann Lúthchleas Gael.

The function will take place in The Pier Inn, Lisnacusha, Lanesboro at 9pm and entertainment on the night will be provided by Declan Nerney and his band.

Cashel secretary Bernie Farrell outlined, “Our club is extremely proud to have an official of the calibre of Martin within our ranks. We are honoured that the Longford County Board has placed its faith in his bid to become the first ever Longford President of the GAA.

“Martin has proven himself an able administrator. As Coaching and Games Development Officer, he implemented new standards which helped to pave the way for a famous Leinster minor championship in 2002.

“He was elected County Chairman in 2002 bringing a vibrancy and selfless work ethic to the top table, always committed to providing the best for teams wearing the Longford colours.

“It was no surprise his vision and dynamism saw him elected vice Chairman of the Leinster Council in 2008 and subsequently Chairman in 2011, giving six years of services which bore all his hallmarks of total efficiency in the process.”

Ms Farrell added, “Martin is now embarking on another very significant journey, the next chapter for a fiercely proud yet unassuming Gael.

“We in Newtowncashel, are organising Oíche na gClub to coincide with the launch of Martin’s Presidential campaign. We would genuinely appreciate all support on Thursday night as we pull on the Longford jersey and unite behind an excellent candidate who will represent our county with distinction and pride.”

Longford GAA Chairperson Brendan Gilmore explained, “Martin’s roles with Leinster Council gave him a very specific insight into the challenges facing the provincial authority as well as the many unique strengths of the GAA. In his role as Chairperson, he served on the Management Committee of the GAA in Croke Park.

“With your support, Martin is embarking on another very significant journey, the next chapter in some respects for somebody who has had the privilege of serving at club, county and provincial level. His experiences have helped him form a clear vision for the role the Association can play in contemporary Irish society and its important profile overseas.”

Mr Gilmore concluded, “While there are no guarantees facing into an election of the magnitude of the GAA Presidential campaign, we can be assured of one promise that Martin will keep if successful - he will, at all times, represent our wonderful Association with honour, humility and enthusiasm so we can all be proud to be GAA members.”

Mr Skelly, together with John Bannon, laid the foundations for the success that is the Longford GAA Race Day and this major event on the county’s social calendar has raised the impressive total of €1.5 million.

An ambitious individual, Mr Skelly previously said, “I would love to be a President of the Gaelic Athletic Association.”

Mr Skelly became involved in GAA administration from a young age, and in 1971, he was appointed as secretary of Cuchulainn’s Minor Club. He was Cuchulainn’s Minor Club Treasurer from 1994 - 2005, and he was Cashel GAA Club secretary from 1982 - 1984, which was unsurprisingly, given his leadership ability, one of the most successful spells for the club.

Coincidentally, two men that Mr Skelly would have worked with very closely in the recent past are also potential Presidential opponents - Sheamus Howlin and John Horan.

The GAA was founded 131 years ago and the Presidency has been held by 38 administrators from 22 counties.

Longford is one of ten counties (the other nine are - Carlow, Kildare, Louth & Westmeath in Leinster, Leitrim & Sligo in Connacht and Derry, Donegal & Tyrone in Ulster) that hasn’t witnessed ‘one of their own’ in the role and Cashel clubman Mr Skelly no doubt recognises the huge challenges he faces in his bid to create history. Ballymahon’s Albert Fallon previously unsuccessfully contested the Presidency.

Longford’s Liam Mulvihill was the GAA’s second longest serving Director General (1979 - 2008) and the driving force behind new Croke Park stadium, demonstrating that the county has a reputation for supplying accomplished leaders.

The GAA has elected eleven Presidents since 1985, six from counties that hadn’t previously been represented in the office.

Can Mr Skelly become the 7th?

Time will tell. But one thing is certain. He will leave no stone unturned in his bid to create history. And on Thursday, at The Pier Inn, the quest for the GAA’s highest office begins in earnest.