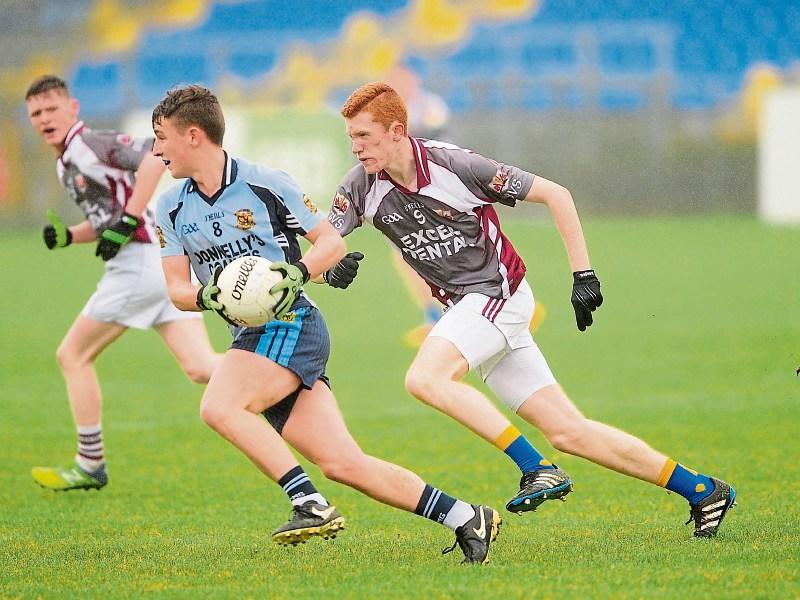 While Cnoc Mhuire had the comfortable margin of eight points to spare in the finish, it was a much closer contest than the final scoreline would appear to suggest as Ballymahon VS were guilty of some very poor finishing in shooting a total of 17 wides (including frees) during the course of the game.

In fact, the south Longford school ended up leading by 1-4 to 1-2 at the break thanks to a rather fortunate goal from centre-half-back Michael Cahill whose shot deceived the Cnoc Mhuire keeper Tom Meehan as the ball ended up in the back of the net.

Conor Dillon (two frees), Thomas McGann (driving a rasping shot over the bar in a goal attempt) and Aidan McGuire accounted for the Ballymahon VS points in the first half while Cian McElligott (brother of the Mullinalaghta players Ruairi, Aidan and Conor) finished a point-blank shot to the net when bang on target for Cnoc Mhuire in the 13th minute.

Cian Madden fired over a couple of frees for the Granard school, who made a strong to the second half to register four points in a row - a brace from Madden (free and play) with wing back Ciaran Reilly (a cracking strike from a tight angle) and Jordan Martin also on the mark.

That left Cnoc Mhuire leading  by 1-6 to 1-4 but Ballymahon VS regained the lead with a goal from full-forward Kyle Kenny in the 38th minute.

Almost immediately Cormac Reilly kicked over the equalising point for Cnoc Mhuire, who proceeded to step up another gear in adding a further 1-2 to their tally with the points coming from Cian Madden and wing back Ryan O’Reilly and Liam Wilson pouncing on the breaking ball to score the goal from a few yards out in the 42nd minute.

Ballymahon VS hit back with a fine point from defender Eoin McCormack who surged forward to shoot over the bar but Cnoc Mhuire regained the upper hand to score another 1-1.

Ryan O’Reilly landed his second point before the killer blow was struck when Jordan Martin scored the third goal for the title winners in the 52nd minute.