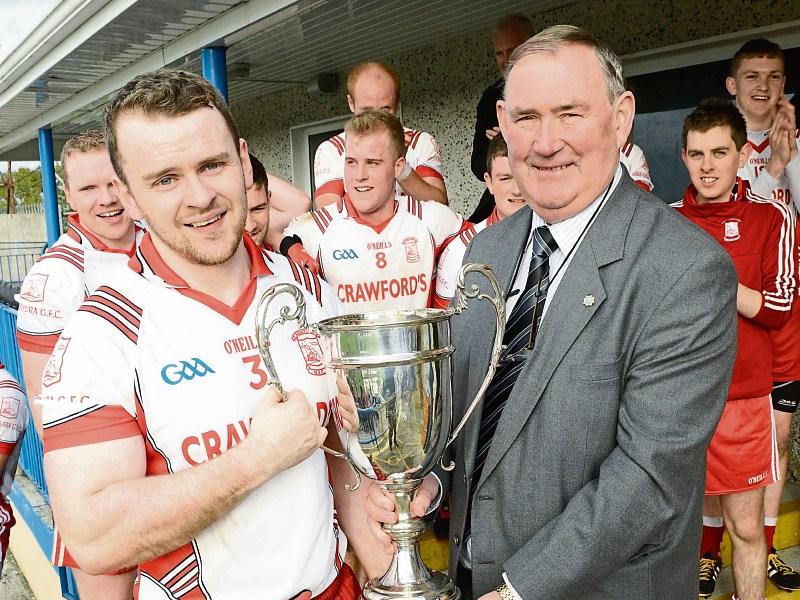 Abbeylara gained some consolation for the bitter disappointment of losing the county final when their second string produced a strong finish to overcome Clonguish in the Reserve Senior Cup Football Final played in front of a sparse attendance at Glennon Brothers Pearse Park on Sunday last.

Fielding a few of the players who featured against Mullinalaghta in the Connolly Cup decider the previous week, Abbeylara were five points down midway through the first half but got right back into contention when Sean Murphy raced through to fire home a cracking goal.

Thus Clonguish had to be content with a slender 1-8 to 1-6 lead at the break after shooting seven wides and the game swung in Abbeylara’s favour when a speculative shot from Barry McKiernan yielded a decisive second goal with seven minutes gone in the second half.

McKiernan’s effort clipped the post as the ball ended up over the line to put Abbeylara in front by the minimum of margins (2-7 to 1-9) and points were then exchanged twice with Sean Murphy and Russell Brady on the mark for the north Longford side while Chris Gordon and Colin Clarke (free) replied for Clonguish.

The sides were all square when Colin Farrell converted a free in the 52nd minute and a draw was looking likely before Abbeylara found that bit extra in the closing few minutes to kick four points in a row - a brace from the influential Padraig Berry with Kieran Mulvihill (free) and Sean Murphy also on target to clinch the title.

Mulvihill and Murphy clocked up 0-6 (four frees) and 1-2 respectively in also playing a prominent part in the deserved success for Abbeylara, who kicked five wides in the second half but still managed to come out on top.

Clonguish played their best football in the first quarter of this entertaining encounter to establish a comfortable 1-5 to 0-3 advantage, the goal a sweetly struck effort from the impressive Colin Farrell in the 12th minute after he latched on to a great ball in from Colin Clarke.

Shane O’Brien fired over a brace of points while centre-half-back Darragh McLoughlin, Christopher Gordon and Farrell (free) also shot over the bar for a slick Clonguish side who were looking good.

Kieran Mulvihill kicked a brace of scores (free and play) with Barry McKiernan also landing a point for Abbeylara who got a big boost when Sean Murphy finished the ball to the net. Then a further point apiece from Padraig Berry and Mulvihill (free) left it level after 21 minutes.

Clonguish hit back with points from Colin Clarke (free) and Shane O’Brien but had a very lucky escape when the clean through Kieran Mulvihill struck a shot against the post when a goal seemed certain in the 26th minute.

Mulvihill then fired over a free before Colin Farrell landed a point for Clonguish before the break.

The ding-dong battle continued in the second half when Mulvihill registered another point for Abbeylara and Clonguish full-forward Alan Sorohan blasted the ball over the bar when a goal was there for the taking with three minutes gone on the changeover.

Sean Murphy then had a shot saved by the Clonguish keeper Declan McKenna before Abbeylara got a crucial second goal from Barry McKiernan that paved the way for their eventual title triumph.