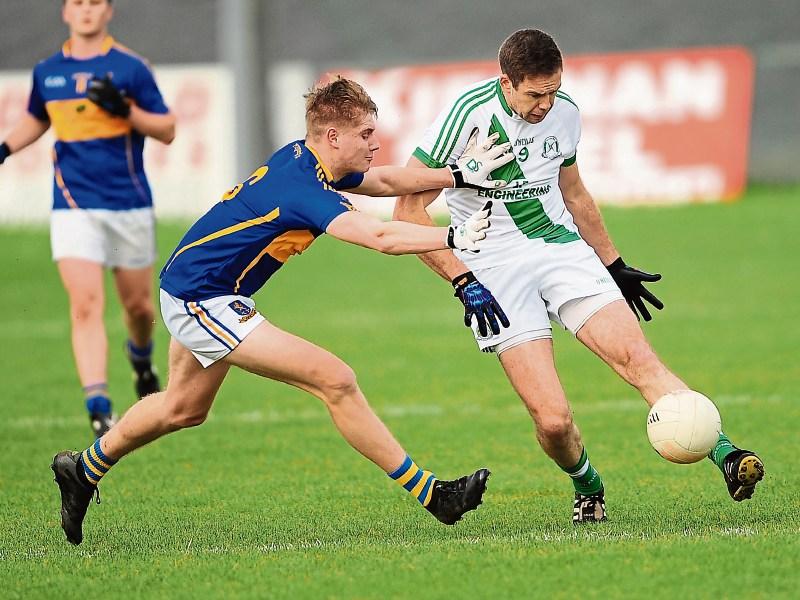 Rocked by a very bad start which left them trailing by   1-3 to 0-0 with just seven minutes gone in the game, St Brigid’s were facing a real uphill battle thereafter against superior Laois opponents O’Dempsey’s side who eventually won by the comfortable margin of nine points.

A small attendance in the region of 200 gathered at Glennon Brothers Pearse Park on Saturday last to watch the action unfold in the Leinster Club Intermediate Football Championship clash played in perfect conditions and Killashee can make no excuses in falling at the first hurdle.

Even though they were denied a stonewall penalty in the 12th minute of the first half when Cillian Lee was clearly fouled in the square when a goal was there for the taking, St Brigid’s were second best for most of the match and were fortunate to be trailing by just four points at the break, 1-9 to 0-8.

to remain in contention with the accurate attacker shooting six points (four frees) in the first half.

Michael Farrell and Emmet Skelly (deep into stoppage time) were also on target for the home side while the crucial O’Dempsey’s goal was a close range effort from corner-forward Stephen O’Leary in the 5th minute following a well-worked move that also involved Johnny Kelly and Darren Finlay.

dangerous whenever they launched an attack.

Willie Skelly kicked a couple of cracking points from play in the first half but the injury hampered 38-year-old forward eventually ran out of steam in the second half after doing his best.

Cox produced a very determined display while Michael Farrell, apart from his three points, also figured prominently in working extremely hard during the course of the game.

County player Conor Meredith was generally in control at centrefield for O’Dempsey’s, who were capable of stepping up another gear when required, and that exactly what happened when Killashee closed the gap to just a goal (1-10 to 0-10) following a point apiece from Michael Farrell and Darren Carberry, the latter on target just after a decent chance of a goal was wasted in the early stages of the second half.

Michael Finlay landed the opening score immediately on the changeover and the lethal corner-forward kicked over four more points (all from play) during a decisive dominant spell for O’Dempsey’s which yielded 1-6 without reply.

It was Finlay who provided the final pass for Barry Kelly to fire home the second goal for the visitors in the 43rd minute (with Stephen O’Leary also involved) while the other two points came from full-forward Brian Nugent (free and play).

O’Dempsey’s were cruising at this stage but credit to St Brigid’s for battling it out to the bitter end and after substitute Mark Rossiter struck a penalty against the crossbar (55th minute) he got another chance to snatch a consolation goal in the 57th minute.

A Killashee point followed from Michael Farrell but it was O’Dempsey’s (the club situated on the outskirts of Portarlington) who had the last say when substitute Matthew Finlay shot over the bar in the second minute of stoppage time.

St Brigid’s always knew that there were in bonus territory when it came to the Leinster campaign and thus will not be that bothered by the early exit after their excellent achievement in winning the county intermediate title which was very much the main priority for the players after the disappointment of losing to Rathcline in the final last year.