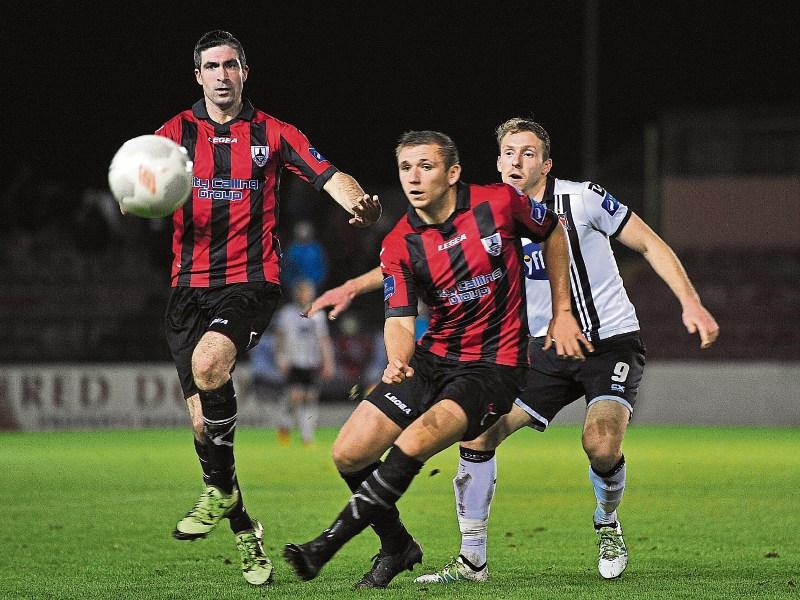 Longford Town were officially relegated to the First Division on a night that had huge implications for the teams both at the top and the bottom of the Premier Division.

This win for Dundalk at City Calling Stadium on Monday last, coupled with Cork City’s defeat against St Pat’s on the same night,  means that the all conquering Co Louth club are on the verge of winning the  league title for the third season in a row.

After Friday night’s defeat against Sligo Rovers the Town were virtually relegated and the dreaded drop back down to the First Division was confirmed in the defeat by Dundalk who were in complete control.

The attendance of 495 that watched this game was made up of mostly Dundalk supporters as their side close in on another Premier Division title triumph. The many poor performances produced by Longford this season has tested even the most ardent supporters and numbers have been falling at the home games in recent months.

In 31 league games the Town have amassed just 13 points and have remarkably failed to win a  Premier Division fixture at City Calling Stadium this season so relegation was no surprise. Their remaining home match in the top flight is against Shamrock Rovers on Friday night week.

Dane Massey opened the scoring for Dundalk in the 14th minute when he latched onto a neat Alan Keane pass and he made no mistake with an unstoppable strike. And the visitors doubled their advantage three minutes from the break when Ronan Finn played the ball into striker David McMillan and he finished to the net for an excellent goal.

Things got worse for the Town in the 48th minute when Dundalk got their third goal. Conor Powell’s clearance deflected off Daryl Horgan and the ball ended up in the net;  summing up the terrible season the club has endured in finishing bottom of the table.

That goal killed the game off as a contest as Dundalk were able to sit back on the cushion of a commanding lead as the Town offered nothing.

It was a comprehensive  win for Stephen Kenny’s side and they had an early chance to open the scoring but Town keeper Ryan Coulter did well to come out and smother the ball as McMillan was sent through on goal.

Brian Gartland and John Mountney both had headers that were easily saved before Massey broke the deadlock to put Dundalk ahead in the 14th minute. Horgan had a chance shortly after to get his side’s second  goal but after showing some trickery to get past two Town defenders his effort was well saved by Coulter.

Longford’s  only real chance in the first half did not materialise until the 35th minute when Kealan Dillon’s long range strike was pushed away by Dundalk keeper Gabriel Sava before McMillan scored the second goal for the league champions in the 42nd minute.

The first chance of the second half yielded Dundalk’s third goal and it was another poor goal for the home side to concede.  Then Andy Boyle very nearly put the ball into his own net after a poor backpass to Sava but it just went wide, much to the relief of the Dundalk defender.

David McMillan had a chance to get his second and his side’s fourth goal after connecting with  Darren Meenan’s cross but his powerful header hit the post as Dundalk cruised to a very easy victory.