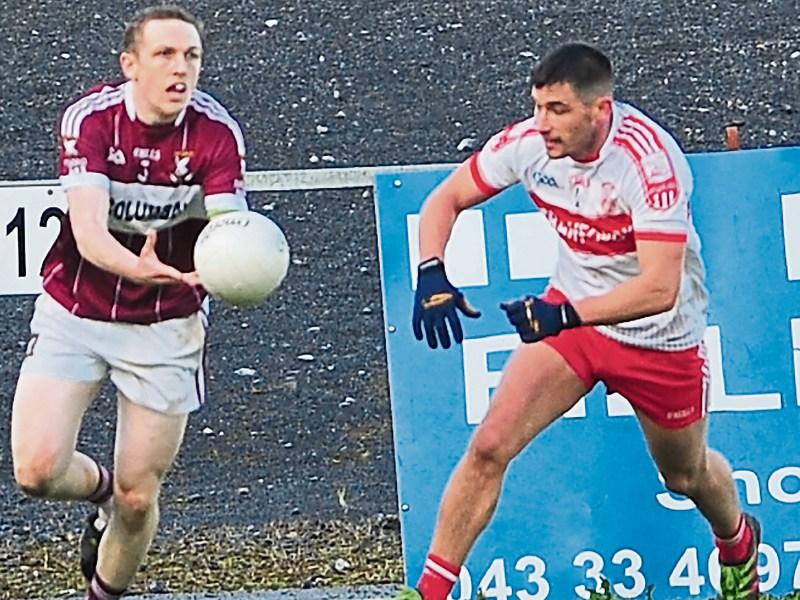 SCORES BY THE CLOCK AS THE ACTION UNFOLDED

2nd minute: Robbie Smyth bang on target for Abbeylara in landing a terrific strike from a tight angle near the sideline.

6th minute: Abbeylara establish a 0-3 to 0-0 lead as Jason Kelly converts a free right in front of the posts.

10th minute: Mullinalaghta, playing against the wind, get their opening score when wing back Donal McElligott shoots over the bar after receiving the ball from James McGivney.

20th minute: A pass from Rian Brady finds David McGivney in some space and he duly slots the ball over the bar to close the gap.

24th minute: Robbie Smyth steps up to fire over a long range free for Abbeylara.

28th minute: Mullinalaghta are awarded a free, which is brought forward following Abbeylara dissent, and David McGivney converts the close range kick for the last score in the first half.

31st minute: GOAL . . .  In a well-worked move direct from the throw-in at the start of the second half, the perfect final pass from Gary Rogers puts Aidan McElligott through and he  blasts an unstoppable shot to the back of the net from a few yards out - a big turning point in the game.

38th minute: A magnificent point from Nigel Rabbitte with the outside of his boot puts Abbeylara back on level terms.

47th minute: Gary Rogers and Donal McElligott (vital cogs in the Mullinalaghta machine) link up to create the opportunity for Jayson Matthews to land another cracking point.

51st minute: A late tackle on Robbie Smyth wins a close range free for Abbeylara and the same player slots over a point to close the gap to the minimum of margins, 1-5 to 0-7.

54th minute: David McGivney lands a well struck free from near the sideline to extend the Mullinalaghta advantage.

59th minute: A foul on Rian Brady gives David McGivney the opportunity to convert another free and he is on target to leave Mullinalaghta St Columba’s in a comfortable four points lead.

First minute of stoppage time: Robbie Smyth kicks over a free to register his fifth point but time runs out for Abbeylara who suffer the bitter disappointment of losing in the senior football championship final for the second year in succession.