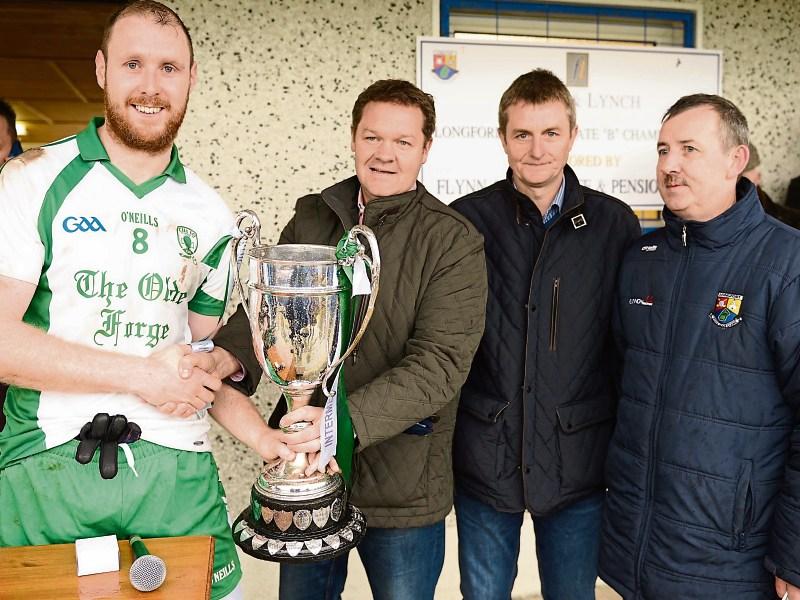 Killoe Emmet Og recovered from a bad start to eventually get the better of Ardagh/Moydow in the Intermediate ‘B’ Football Championship Final played in difficult wet and windy conditions at Glennon Brothers Pearse Park on Sunday last.

While the always dangerous corner-forward Aaron Clyne received the man-of-the-match award, the value of experience really stood to Emmet Og in yet another title triumph with Ciaran Keogh, Gerry Carberry and Joe McCormack all performing prominent roles in the deserved success.

It might have been a different story but for a fine foot save by Killoe keeper Stephen Coy who kept out a penalty from Rory Sullivan in the early stages of the game, not long after David Farrell had scored a goal for Ardagh/Moydow in the 5th minute after he got the vital touch to a ball in from Thomas Farrell.

But the amalgamation failed to register another score until the 11th minute of the second half whereas Emmet Og clocked up 1-7 without reply, the goal coming from the generally prominent full-forward Bernard O’Connor who planted a well struck shot into the back of the net in the 14th minute after he was put through by Padraig O’Reilly.

And a few minutes later O’Connor was set up by Aaron Clyne for another clear-cut chance but was denied on this occasion following a terrific point-blank save from Ardagh/Moydow keeper Brendan Conway.

Killoe ended up leading by 1-5 to 1-0 at the break with Cormac O’Reilly, Seamus McCormack, Clyne (free), defender David Kiernan and Aaron Fitzpatrick shooting the points - the latter with a glorious chance of a goal when he blasted the ball over the bar in first half stoppage time.

Competent Emmet Og netminder Stephen Coy had to be alert to block a goal attempt from Rory Sullivan in the 26th minute and Ardagh/Moydow fell further behind in the early stages of the second half when Seamus McCormack converted a free.

The Killoe advantage was extended when Aaron Fitzpatrick landed a terrific point against the wind in the 39th minute before Ardagh/Moydow hit back with a brace of points in quick succession from Rory Sullivan who was posing a considerable threat in attack.

David Kiernan then scored his second point for Emmet Og and while wind assisted Ardagh/Moydow were thrown a lifeline when Rory Sullivan capitalised on the breaking ball to score an opportunist goal in the 45th minute, that was as good as it got for the beaten finalists.

Killoe got back on top and after Bernard O’Connor shot over the bar with a goal on in the 56th minute the Intermediate ‘B’ champions got another point in stoppage time when Aaron Clyne was on target to cap a fine display.