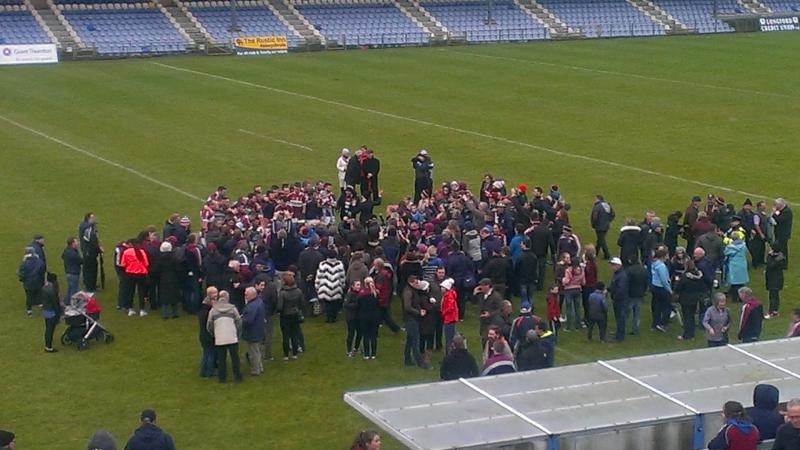 Mullinalaghta celebrate on the pitch after their victory.

There were unbridled scenes of joy and emotion in Glennon Brothers Pearse Park as heroic Mullinalaghta St Columba’s clipped the wings of their next door neighbours Abbeylara to historically capture their first Longford SFC title since 1950.

Aidan McElligott’s quick fire goal at the start of the second half ultimately proved the difference as Mullinalaghta, managed by Cavan man Mickey Graham, fended off the gutsy challenge of Abbeylara by 1-8 to 0-8.

Abbeylara led by 0-5 to 0-3 at half time, but immediately after the resumption McElligott’s goal put Mullinalaghta in the driving seat.

Abbeylara did manage to gain parity, 0-6 to 1-3, thanks to a 39th minute point from the excellent Robbie Smyth.

But that was the only occasion that they were level as Mullinalaghta, powered by the prowess of Man of the Match John Keegan around midfield and the deadly accurate David McGivney, outscored Abbeylara by 0-5 to 0-2 over the closing twenty minutes to deservedly claim the Sean Connolly Cup.

Mullinalaghta captain Shane Mulligan thanked team manager Graham and his selectors for leading them to the promised land and ecstatically declared how their long 66 year struggle to claim the title had ended.

Mullinalaghta did amass 13 wides to Abbeylara’s 3, however, those misses were only a slight blot on their copybook as they were in total control during the second half.

Playing with the benefit of the strong wind at their backs and towards the scoreboard end of Glennon Brothers Pearse Park, it was Abbeylara that started brightest and by the 7th minute Maurice O’Connor’s side were 0-3 to 0-0 ahead.

Robbie Smyth, Colm P Smyth and Jason Kelly (free) pointed the way for the Abbey who were beaten in the 2015 final by Killoe Emmet Og.

Mullinalaghta broke their duck in their 10th minute as half back Donal McElligott stormed upfield and dispatched a fine point.

Robbie Smyth, who looked dangerous anytime possession came his way, and David McGivney exchanged points before Smyth (free) made it 0-5 to 0-2 after 25 minutes.

Mullinalaghta had amassed five wides by this stage and they concluded the half with a converted free by David McGivney.

Referee Patrick Maguire allowed two minutes of additional time at the end of the first half, a spell that saw James McGivney receive a yellow card.

There was an explosive start to the concluding half. Almost directly from the throw-in Jayson Matthews and Gary Rogers combined to release the unmarked Aidan McElligott and he drilled the ball beyond Abbey ‘keeper Damian O’Connor. It was the perfect tonic for Mickey Graham’s Mullinalaghta as it put them ahead for the first time in the match.

Abbeylara equalised in the 38th minute with a beautiful point from Nigel Rabbitte, 0-6 to 1-3.

John Keegan kicked Mullinalaghta’s fifth wide of the second half as their wides tally crept up to eleven (eight more than Abbeylara).

But the ‘half parish’ men made their territorial superiority count as in the 44th and 46th minutes Jayson Matthews landed two wonderful points, Mullinalaghta 1-5 Abbeylara 0-6.

Donal McElligott became the third Mullinalaghta player to be yellow carded, following in the footsteps of James McGivney and Shane Mulligan, as he needlessly fouled Robbie Smyth. Smyth recovered and scored the free himself, leaving a point in it after 49 minutes, Abbeylara 0-7 Mullinalaghta 1-5.

Mullinalaghta replied with three converted frees in succession from the boot of David McGivney, giving them a four point lead, 1-8 to 0-7. Robbie Smyth (free) reduced the arrears to a goal, 0-8 to 1-8.

Abbeylara did try desperately hard to strike for a late equalising goal but there was to be no denying magnificent Mullinalaghta their day of glory!