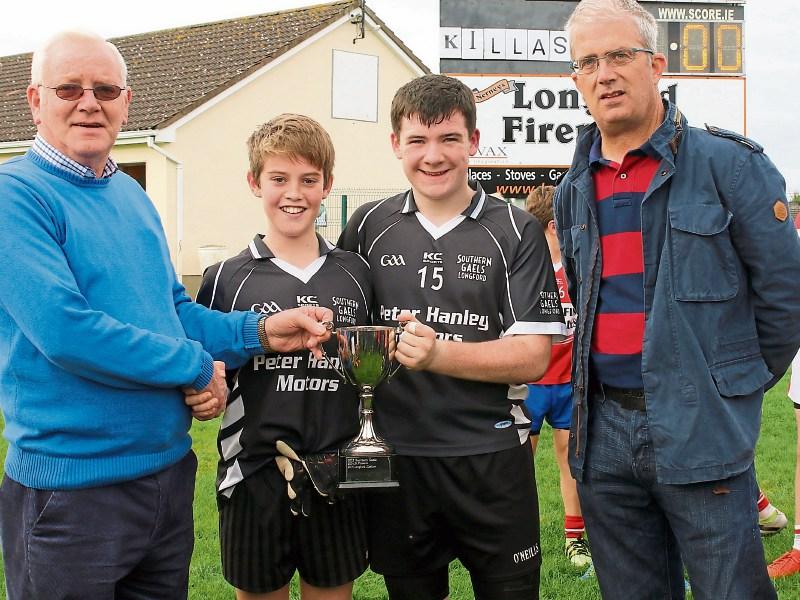 There was little separating the sides for most of this entertaining encounter at Dunbeggan on Sunday last but Southern Gaels found that bit extra to eventually emerge victorious in the under 14 ‘C’ Football Championship Final.

The Cashel and Killashee amalgamation had five points to spare over Clonbroney in the finish and while the success was deserved on the basis of a better balance in a fine team effort produced by Southern Gaels it must be said that the gallant Ballinalee boys battled it out to the very end in the hope of salvaging the situation.

With 19 minutes gone in the game at the Grattans GFC grounds, Southern Gaels were 1-3 to 0-2 ahead with Mark Brehon scoring the goal in the 16th minute while the points were fired over by Iarlaith Dolan (an excellent effort), Peter Nolan and Matthew Steadman.

Both side were guilty of squandering a number of chances in the early stages and right throughout the cracking contest and the opening score did not materialise until the 10th minute when Sean O’Sullivan landed a point for Clonbroney.

Soon after Bobby Crilly shot over the bar and the Sean Connolly’s youngsters proceeded to enjoy their best spell of the game to score 1-3 between the 19th and 25th minutes.

John Doris finished the ball to the net for the goal while the points came from Bobby Crilly, Sean O’Sullivan and Dylan Lynch, the latter scoring a second goal for Clonbroney direct from a free in the 28th minute as his side ended up leading by 2-6 to 1-6 at the break.

Joshua Healy surged forward to kick a great score for Southern Gaels in the 25th minute and further points followed from Conor Skelly (free) and Iarlaith Dolan with Sean O’Sullivan on the mark again for Clonbroney deep into first half stoppage time.

With just a minute gone on the changeover, Clonbroney (minus the injured Rory O'Leary for the final) extended their advantage when Dylan Lynch converted a free and the teams then scored a goal apiece with Matthew Steadman on target for Southern Gaels while Adam Glennon finished the ball to the net for the Ballinalee side.

A goal and a point (free) in quick succession from Conor Skelly left the sides all square (3-7 to 3-7) and Southern Gaels continued to pile on the pressure in adding another 1-4 to their tally without reply in a decisive dominant spell.

Mark Brehon got the crucial fourth goal in the 40th minute with Peter Nolan landing a brace of points (‘45’ and play) while defender Dan O’Shea joined the attack to fire over a fine point. Iarlaith Dolan got another score and Southern Gaels were in  control, leading by the comfortable margin of seven points.

Clonbroney were given a glimmer of hope with a goal from Jack Connell in the 56th minute but all they could manage after that was a point from a Dylan Lynch free, even though referee Amanda Matthews played ten minutes of additional time due to injury stoppages in the second half.

Peter Nolan scored another point for Southern Gaels in the 58th minute and shot over the bar again in the sixth minute of stoppage time to clinch the U-14 ‘C’ title for the Cashel and Killashee combination.