Killoe lose after extra-time as Leinster title hopes are dashed 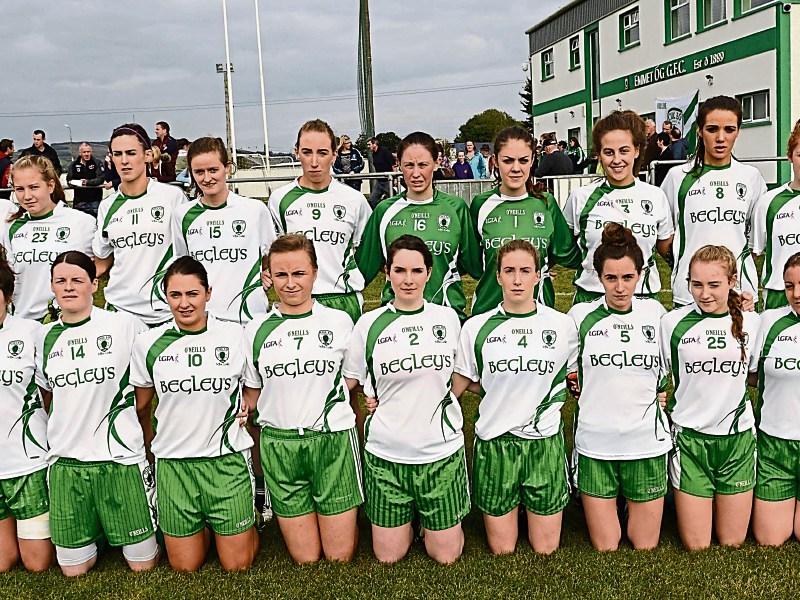 There was heartbreak for Killoe ladies on Sunday last as they lost out to Dublin side Clann na Gael, Fontenoy after extra-time in the Leinster Club Intermediate Championship semi-final at Emmet Park.

Killoe had been ahead for the majority of the game but credit to the Dublin Intermediate champions who fought back in normal time to kick over two late points to force the game into extra-time.

Despite falling behind to Rebecca McDonnell’s goal in the third minute of extra-time, Killoe worked hard to get back into the game but in the last minute McDonnell and Aisling Ryan hit over points to give the visitors a two point win in the end.

It was an excellent game of football and the goals were crucial in the end for Clann na Gael but Killoe will feel disappointed with the way both McDonnell and Kate McKenna got through to score the goals.

Killoe started well and kicked over three early points. Clann na Gael’s first attack in the sixth minute yielded the  first goal as Kate McKenna was allowed to get through too easily. They went ahead twice by two points but by the 22nd minute Killoe had levelled with points from Sabrina Hackett (free) and Anne Marie Bratten.

A neat point from Edel Quinn edged Killoe in front in the 24th minute and minutes later Bratten set up Hackett and she found the net with an excellent finish. Two points in quick succession from Clann na Gael cut the gap to two by the 30th minute but in first half stoppage time Quinn and Hackett (free) were on target to give Killoe a four point lead at the break; 1-9 to 1-5.

The lead was cut to just one point in the 38th minute when Aisling Ryan kicked over three points (one free). In the 40th minute Killoe got a much needed point from Fiona Fox but once again the Dublin outfit came back with Ryan kicking over two more frees to level the game by the 47th minute.

Killoe then wasted chances but were back ahead by two again in the 55th minute. They couldn’t add to that and two points from the boot of Aisling Ryan (one free) levelled matters by the 59th minute,  1-12 to 1-12

Rebecca McDonnell had a chance to win the game for Clann na Gael in stoppage time but shot wide, only to  make amends later in the game.

Anne Marie Bratten kicked over the first point in extra-time but two minutes later Clann na Gael grabbed their second goal; McDonnell racing through to finish the ball to the net.  Sabrina Hackett kicked over a free for Killoe to leave one between them at half-time in extra-time.

Within seconds of the restart, Bratten drew Killoe level but despite having possession they failed to get any more scores. The Longford senior champions were made rue that as Clann na Gael hit over two late points to clinch  a narrow win.