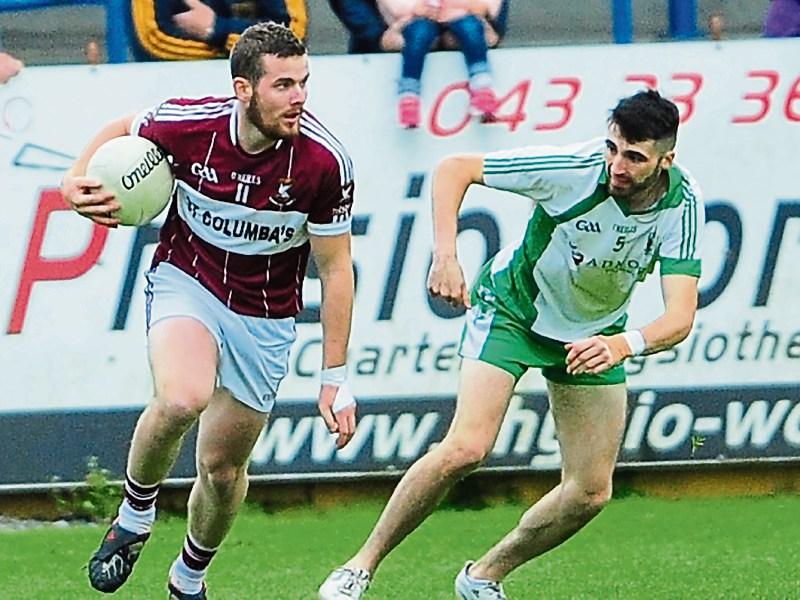 James McGivney has come a long way since his secondary school education in Cnoc Mhuire, Granard and the talented football career of the majestic Mullinalaghta man could reach new heights on Sunday next if his club can succeed in winning the county senior championship title for the first time in 66 years.

McGivney had many Northern Gaels team-mates alongside him on the various Cnoc Mhuire teams  and he and Abbeylara ace Robbie Smyth have virtually followed the same path in football terms; playing on the same teams for the school, the underage club and also for Longford.

During his time in Cnoc Mhuire he won three Leinster U-16 Vocational titles with his school and one Senior VEC ‘B’ success with Longford in 2009 when he was just a third year student.  They went on to reach the All-Ireland Final in that competition but unfortunately lost out. The following year he was a member of the Longford team that  lost the Leinster VEC Senior ‘A’ final.

Although McGivney left Cnoc Mhuire without an All-Ireland medal, his younger brother David was the captain in 2013 when the Granard school won the All-Ireland Vocational senior title and he will also be in action for Mullinalaghta in the county senior football final on Sunday.

James McGivney went on to achieve great success with Longford as he was a member of the county minor football team that won the provincial championship title in 2010, beating Offaly in the final at Croke Park.

In the aftermath of his terrific performances for the minors, he graduated into the U-21 set-up and was involved in their run to the Leinster Final in 2011 which unfortunately ended with the bitter disappointment of that agonising one point defeat against Wexford.

McGivney was joined on the Longford team in Portlaoise that night by his current Mullinalaghta colleague John Keegan along with three players he will come up against in the 2016 county final - notably Robbie Smyth, Fergal Battrim and Colm P Smyth who will be lining-out with Abbeylara on Sunday.

2013 was a great year for the  McGivney brothers. While David captained Cnoc Mhuire, Granard to All-Ireland senior glory,  just a month before that James played a pivotal role as Longford sprang a major shock to defeat the reigning Leinster and All-Ireland champions Dublin in the provincial U-21 championship clash at Parnell Park.

After taking a break from the county scene, James McGivney returned this year to the senior squad and produced some tremendous performances as Longford consolidated their place in Division 3 of the National League and scored memorable wins over Down and Monaghan in the All-Ireland Qualifiers before making it really difficult for Cork in the third round defeat at Pearse Park.

2016 has been a good year so far for McGivney but it could get even better on Sunday if he wins the ultimate prize; a Longford Senior Football Championship medal with his club Mullinalaghta St Columba’s.