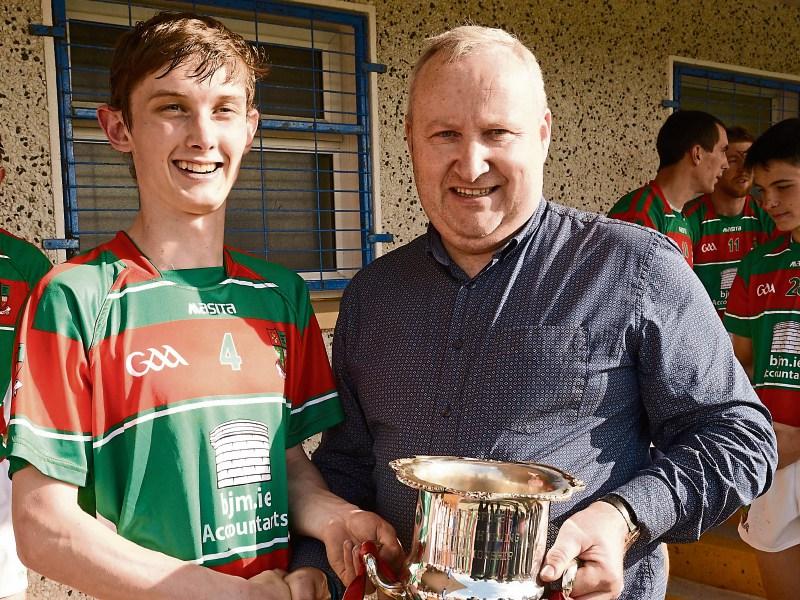 John Gaffney’s acceptance speech on Sunday last as Wolfe Tones senior hurling captain was short and sweet. Gaffney is a modest and quiet lad who prefers to let his feet and hurling do the talking.

He did find it hard to believe that he was captain on the day that his club completed another memorable four-in-a-row. Speaking to the Leader after the game the young defender said how proud he felt to captain his side to a county title: “It’s a great achievement and hopefully we can keep it going. It would be great to get five-in-a-row but that’s for next year. It would be good to have a run in Leinster as we were close last year and the year before in the quest to win a provincial title.”

Speaking about the Leinster campaign, Gaffney believes the way for Wolfe Tones to improve as a team is to constantly play in the provincial championship: “It’s great to have those outings in Leinster because games are more difficult. It’s good to have that before we get back into the county team and hopefully I will be involved again.”

In the end Sunday’s success was all too easy for the Mostrim club. With only three hurling clubs in Longford, Wolfe Tones play in the Westmeath League. That’s a huge help admitted Gaffney: “We get challenges and play games in Westmeath. That really helps. We are playing stronger teams and because of that we are working hard to be better. There is a load of young lads here, including myself, coming on and these games help us gain valuable experience.”

Wolfe Tones have a good mix of youth and experience in their side. The two work very well together and great credit goes to the structures they have had in place at underage level: “We have been working on it for a good few years and Willie (Browne) and Mattie (McLoughlin) and all the boys have been doing great stuff. We have some of our players helping out at underage level too which is great. It’s nice to see the older lads, the more experienced ones, helping out with the development side of things,” commented Gaffney.