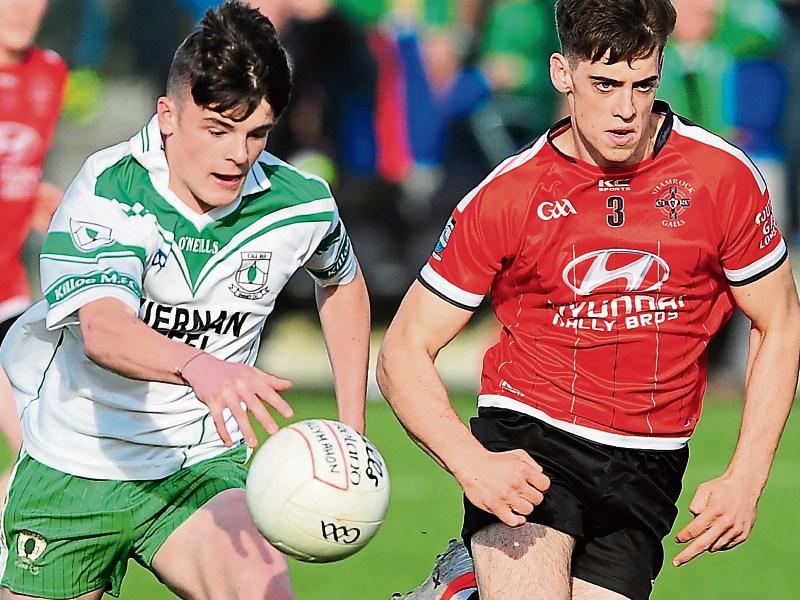 Shamrock Gaels, the strong combination of the Ballymahon/Forgney and Cashel/Killashee underage clubs, were crowned county minor champions after scoring a comprehensive win over Killoe Og in a rather one-sided ‘A’ Final at Glennon Brothers Pearse Park on Sunday last.

Two goals in the space of a minute from Longford minors Cillian Lee and Joe Kelly set Shamrock Gaels on the road to victory and Killoe were shattered by a first half scoring blitz that yielded 2-5 for the amalgamation in a glorious spell between the 11th and 20th minutes that decided the destination of the Harte Cup for 2016.

Just a solitary point separated the sides (0-4 to 0-3) in the early stages of the game with Aaron Nally opening the scoring for Shamrock Gaels direct from the throw-in and further points followed from Dylan Farrell (free) along with a brilliant brace from Joe Kelly.

Cian Dooner fired over a couple of delightful scores for Killoe before David McCarthy converted a free in the 10th minute but the underdogs were then completely torn to shreds with Ronan Healy putting Cillian Lee clean through for a cracking goal in the 11th minute.

Almost immediately Joe Kelly shot to the back of the net, after linking up with Jack Fox, and five points in a row followed from five different players - Aaron Nally, Eddie McLoughlin, Ronan Healy, Ross Claffey and Dylan Farrell (a terrific strike).

Kelly and another county minor Healy were completely in control at centrefield and while it now looked like a mission impossible for a stunned Killoe side who trailed by 2-9 to 0-3, they were given a glimmer of hope when Brian Harte burst his way through to score a very good goal in the 21st minute.

David McCarthy then fired over a brace of frees to close the gap to seven points at the break (2-9 to 1-5) and the Killoe revival continued when prominent full-forward McCarthy landed a well struck effort from play with just a minute gone on the changeover.

Just when it appeared as if Shamrock Gaels might be coming under some pressure, they struck the killer blow when Joe Kelly set off on a defence splitting penetrating run to score a third goal in the 35th minute after he played a neat one-two with Aaron Nally.

The exceptional Kelly (with a total of 2-3 to his credit) deservedly received the man of the match award in the aftermath of a first Harte Cup success for Shamrock Gaels in only their second year in existence and the south Longford side were the firm favourites to win the Minor ‘A’ title before a ball was kicked in this year’s U-18 championship.

While the concession of that third goal proved to be a crushing blow for Killoe, they kept plugging away in enjoying a fair amount of possession and David McCarthy landed another fine point from play in the 38th minute.

Another Killoe goal was badly needed and substitute Shane Thompson squandered a great chance when he shot across the face of the goalmouth in the 42nd minute when looking all set to plant the ball in the back of the net.

That was a lucky escape for Shamrock Gaels but they gradually regained their composure with another score materialising in the 47th minute as the generally impressive Ronan Healy shot over the bar.

Shane Thompson then had another goal attempt but his effort was deflected out for a ‘45 before Killoe eventually scored again when their chief marksman David McCarthy fired over a free in the 52nd minute for his sixth point.

That was as good as it got for the gallant losers as Shamrock Gaels dominated the remainder of the match to register five more points which included three fine efforts (all from play) from the accurate Dylan Farrell who played a leading role in the emphatic success.

Cillan Lee (a great strike) and Joe Kelly (free) were also on target for the superior amalgamation who played some excellent football throughout the final and ended up winning by the wide margin of 13 points which was somewhat harsh on Killoe who were better than the final scoreline would appear to suggest.