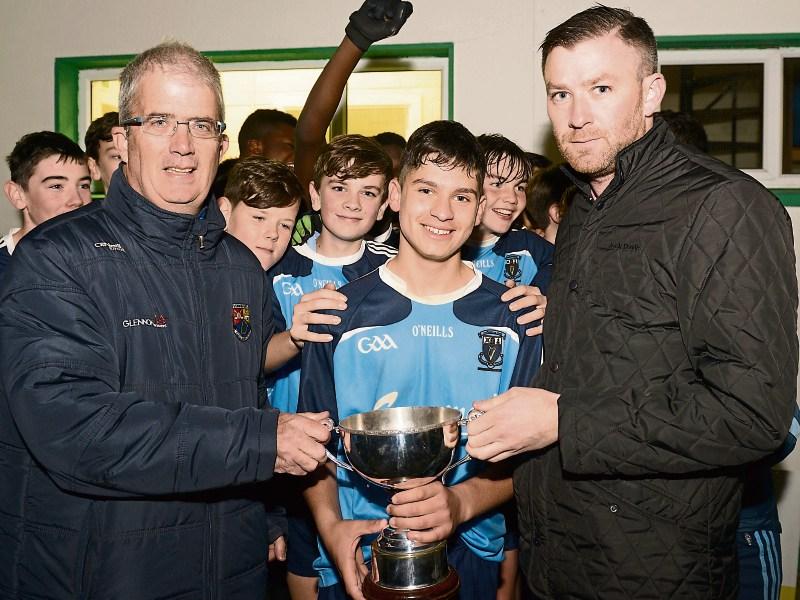 Longford Slashers won the Under 14 Football Championship title for the 28th time when the current crop of talented players succeeded in beating Northern Gaels at the second attempt in a compelling county ‘A’ final replay at Emmet Park, Killoe on Thursday night last.

Goals from Donal Sheahan in the 4th minute and Dean Coughlan in the 25th minute of the first half proved decisive as the John Murphy managed Slashers team established a grip on the game which they refused to relinquish, although they had to endure a nervous finish as the Abbeylara and Mullinalaghta amalgamation staged a determined late comeback.

Slashers led by 2-2 to 0-5 at the break and looked to be in complete control when they extended their advantage with three cracking points in the second half from Mario Pirlog, who was a constant threat in attack with Dean Coughlan and Miroslav Cureja also much to the fore up front.

Second best for most of this entertaining game, Northern Gaels were thrown a late lifeline when a speculative shot from Cathal Byrne deceived the unfortunate Slashers keeper Stephen O’Brien as the ball ended up in the back of the net in the final minute of normal time.

This gift goal was the Gaels first score in the second half and they almost snatched a dramatic last gasp equaliser when a point-blank shot from the boot of Ciaran Scanlon was deflected over the bar by Slashers defender Desmond Akenbor deep into stoppage time.

The resolute Akenbor was the saviour and he produced a fine overall performance in clearing the danger on a number of occasions. Particularly impressive in the heart of the solid Slashers defence was centre-half-back Sean Morgan while Ben Lynn figured prominently at midfield.

Northern Gaels were strong down the middle and while Logan O’Reilly and Conor Leonard enjoyed some good spells at centrefield in the first half, they were not near as effective in the second half as Slashers got on top in most positions on the pitch.

Wing back Mark McNerney and corner-forward Cathal Gilligan played well in the first half for the gallant losers who were hard hit by the goals they conceded. The first was created by Miroslav Cureja who stormed through on a penetrating run through the Northern Gaels defence and while his subsequent shot was well saved by opposing keeper Frank Sheehy the ball broke kindly for Donal Sheahan who finished to the net from a few yards out.

The second Slashers goal was something similar with the strike from Cureja blocked down but the alert Dean Coughlan pounced to hit the target from close range and the always dangerous corner-forward also landed a point in the early stages of the game.

Ben Lynn converted a free for the other Slashers score in the 7th minute while three of the five Northern Gaels points in the first half was fired over the bar by Cathal Gilligan with another threat Ciaran Scanlon accounting for the other brace - play and free.

While Dean Coughlan had a goal attempt blocked in the early stages of the second half, there was a lucky escape for Slashers later on when Northern Gaels had a shot cleared off the line but there was no stopping super Mario Pirlog who kicked three quality points for the eventual champions in the 35th, 50th and 51st minutes.

Captain Pirlog also went close to scoring a goal late on with his lightning pace posing serious problems for the Northern Gaels defence throughout the game and Slashers survived in a tense and exciting finish to emerge worthy winners of the U-14 ‘A’ championship title.