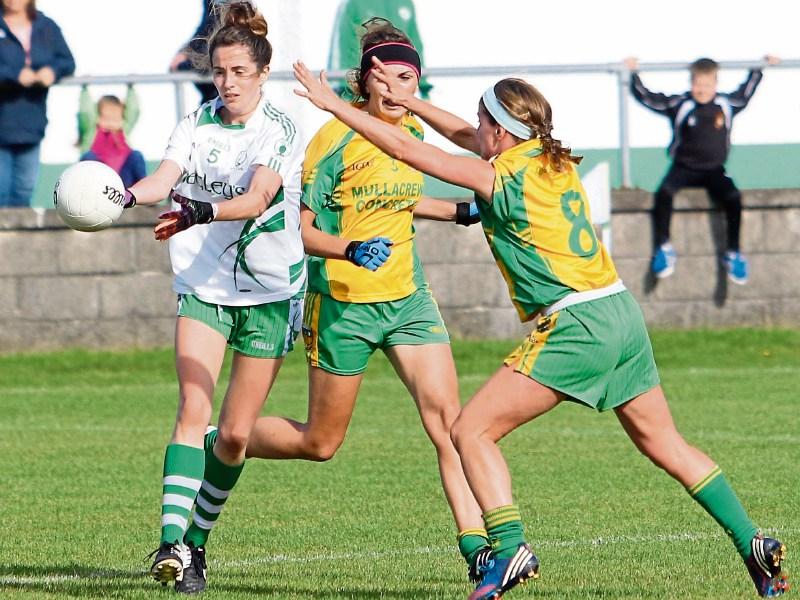 Killoe ladies booked their place in the semi-final of the Leinster Intermediate Club Championship with a fine win over Louth opponents Stabannon Parnells at Emmet Park on Sunday last and now take on  Dublin champions Clan na Gael Fontenoy in the last four clash on Sunday next, 2.30pm.

The Louth side started the brighter and aided by a strong wind opened up a 0-2 to 0-0 lead. Killoe gradually settled into the game and having opened their account with a point from Anne Marie Bratten they soon hit the front with a Sabrina Hackett goal following some excellent work from Edel Quinn.

Further scores followed from Hackett and Anna McDonnell to extend the lead but Stabannon refused to panic and they were back on level terms at the end of the first quarter.

Killoe regained the upper hand and finished the first half strongly with a trio of points from Fiona Fox, a goal from the industrious Edel Quinn and another Anne Marie Bratten point to establish a fairly comfortable 2-7 to 0-8 lead at the break.

Stabannon got the second half off to a perfect start with an early goal which left just two points between the sides but Killoe then stepped up another gear with a point from Anne Marie Bratten, two quick goals from lively corner-forward Fiona Fox and another from Edel Quinn to put them in a commanding 5-8 to 1-8 lead.

A yellow card for a Stabannon player left the task even more difficult for the Louth side and another point from Edel Quinn and three from full-forward Sabrina Hackett left Killoe 5-12 to 1-12 ahead entering the closing stages.

Stabannon refused to surrender and in the closing minutes scored three goals, two of which came from penalties, to leave just a kick of the ball between the teams.

Killoe showed great experience and character however and inspirational midfielder Jacinta Brady raced up the field and shot over the bar to relieve the pressure and clinch a 4 point win for the Longford senior champions.