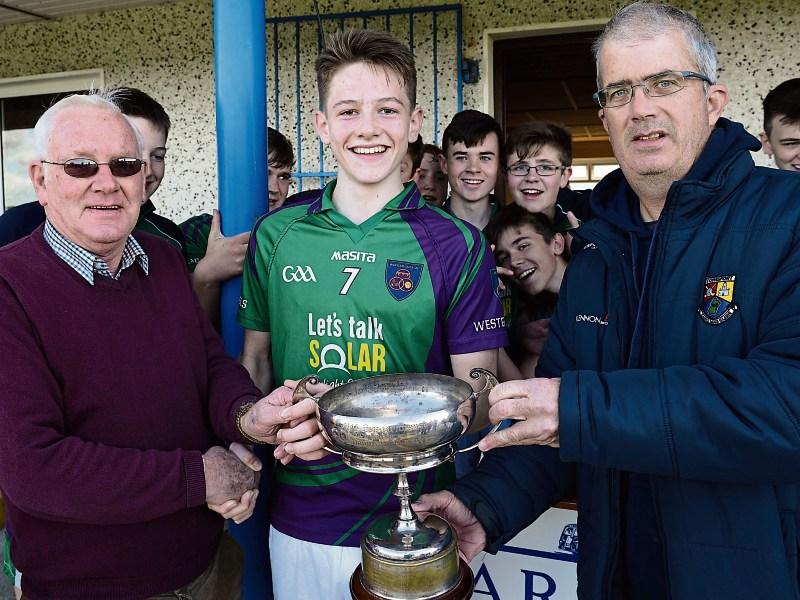 A point from a free converted by Kevin Tansey just minutes from the end saw Shannon Gaels claim the U-14 ‘B’ Football Championship title against a gallant St. Francis side in this exciting final at Glennon Brothers Pearse Park on Saturday last.

The Dromard team had fought back from a seven point half-time deficit and the sides were all square in the 53rd minute thanks to a fine point from substitute Aaron Farrell. They then had chances to go ahead for the first time but Shannon Gaels defended well. With the game looking like it could go to extra-time Shannon Gaels were awarded a free which Tansey duly pointed to seal the success for the Lanesboro outfit.

It was tough on St Francis but they will rue the poor start they made to this game. A goal from Ronan Corcoran in the 46th minute and the fine performance from midfielder Aaron Darcy saw them get back on level terms by the 48th minute.

Shannon Gaels started the game very well with Kevin Tansey their main man. He hit over two fine points as his side held an early three point lead. Darcy replied with a pointed free for St Francis  before Tansey was on target again with an excellent point.

Tansey extended his side’s lead to six in the 16th minute when he soloed through and his shot looked like going over the bar but it dipped over the head of opposing keeper Cathal Reilly and the ball ended up in the back of the net.

St Francis  cut the gap to just two with a point from Farrell and a goal from Joshua Gray but Shannon Gaels replied with points from Seadhna Ryan (2), Oisin Kenny (2) and another from Kevin Tansey to put seven between them going in at the break; 1-9 to 1-2.

St Francis came a lot more into the game in the second half with Aaron Darcy leading the fightback and points from Aaron Farrell, Darcy (free) and corner-back Conal Palin cut the gap to four by the 38th minute.

After 11 minutes without a score Oisin Kenny hit over a much needed point for Shannon Gaels in the 41st minute but St Francis hit back with a goal from Ronan Corcoran and points from Aaron Farrell and Aaron Darcy (free) to level matters by the 48th minute.

Sheadhna Ryan edged the Rathcline side ahead again in the 51st minute but Aaron Farrell replied for Dromard two minutes later.

With so much at stake in the final five minutes both defences upped their performances and three minutes from time St Francis conceded a free with Kevin Tansey firing over the point to clinch the U-14 ‘B’ title for Shannon Gaels.