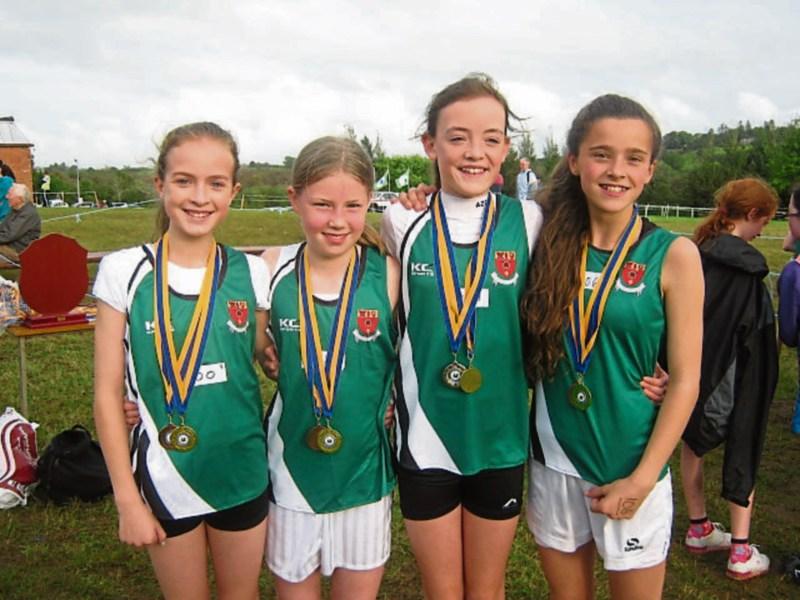 Despite the very heavy rain earlier in the day the course held up and the programme went off very well with the children and their families enjoying the evening races.

The organising committee was delighted to see so many children get the opportunity to be active with their friends and classmates as they took to the starting line to run for their school.

Medals were presented on the spot to the first ten individuals across the finish line in each race.    Sian Gallagher, Ardagh, won the first race on the programme, the 3rd & 4th Class Girls 800m from a line-up of 54 runners. Her strong lead and 7th place finish by young Rachel Keenan only in 3rd class, brought the silver team medals home to Ardagh.

Only a few students from Tashinny School made the journey to Moyne but they made their presence known as they managed to have an individual runner in the top 10 in every race with Carly Food taking individual silver.

Conor McHugh, Stonepark, won gold in the junior boys’ race; and together with Patrick Clancy led his classmates to the set of 1st place team medals.

Enda Quinn, Killoe, won the individual silver in the largest race of the day with 60 contenders. Kate Hagan, Newtownforbes, made winning look easy in the senior girls’ 1000m race. The season only begins with the schools’ race so we can expect to hear more about Kate in the coming months as she has experience on her side competing in Connacht and National cross country at Club level last year.

Rosie Flanagan, Stonepark, gave strong challenge to capture the individual Silver bringing home a medal for the fourth year in a row. Eoin Kiernan, Legan, won the final race of 51 boys in the 5th & 6th Class 1000m. Conor Smith, Newtownforbes, gave his all to take the silver.

After the results for team placings and scoring for the Harry Farrell Perpetual Shield were compiled five schools received a visit from members of Longford AC juvenile section to present the teams medals.

Congratulations to St Theresa’s NS, Killoe  leading the way with two 1st place teams, one 2nd place and one 3rd place team, as well as the most top 20 finishers overall. Scoil Mhuire, Newtownforbes is also commended on their genuine school wide effort coming in a close 2nd place overall with two teams winning silver and two teams winning bronze.  Stonepark, Ardagh and Colehill were also prominent on the scoreboard.

The top ten finishers as well as the 1st, 2nd and 3rd place teams in each race all qualify to go forward to the Connaught Primary Schools Championships on Saturday, October 15 in Sligo. All schools have received this information and it will be posted on longfordac.com for parents to check.

Longford AC extend an invitation to all the children that qualified for the next level to join us for training every Friday, 7-8pm, outdoors at The Mall.

The Secondary School 1st/2nd year race is slowly gaining popularity with full teams in both the girls 1600m and boys 2K from Moyne and Mercy, Ballymahon taking part as well as individual runners from Lanesboro Community College and St Mel’s College. Cross country running demands endurance, strength and speed and this training can be a great way to start off the new school year getting students active and increasing fitness.

As the students finished it was time to introduce a new event – Combined Open Cross Country for adult runners:  Junior, Senior and Over 40s.  It attracted a very talented field with runners Michelle McGee, Barry Sheil and Adriana Melia all doing well in the Women’s 4K and Men’s 6K. It is expected that a positive recommendation from all that took part will help the event grow in 2017.