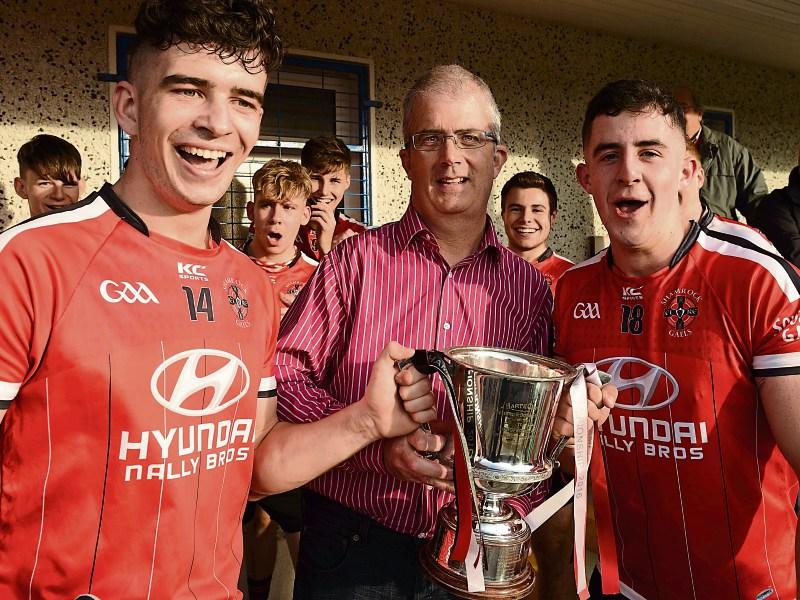 Two more championship finals were played at Glennon Brothers Pearse Park on Sunday with the all conquering Wolfe Tones hurlers winning the Senior Championship title for the fourth year in a row.

The Mostrim club, who were capturing the county senior hurling title for the 17th time, scored a comprehensive 2-15 to 1-5 win over Clonguish Gaels and it was virtually all over as a contest at half-time with Wolfe Tones establishing a commanding 2-5 to 0-1 lead.

The crucial goals were scored by Sean Browne and Paddy Cullen and whatever slim hopes Clonguish had of staging a dramatic comeback in the second half were dashed when their chief marksman Joe O’Brien was forced to retire injured just before the break.

A glorious scoring blitz in the first half which yielded 2-5 in the space of nine minutes proved to be the decisive factor as Shamrock Gaels stormed to a most emphatic 3-15 to 1-8 victory over Killoe Og in the Minor Football Championship Final.

The goals were scored by Cillian Lee and Joe Kelly in the space of a minute and while Brian Harte gave Killoe a glimmer of hope when he raced through to finish the ball to the net in the 21st minute, they were fighting a losing battle against the strong Ballymahon/Forgney and Cashel/Killashee amalgamation.

Shamrock Gaels ended up leading by seven points at the break, 2-9 to 1-5, at the break and put the issue beyond all doubt when man of the match Joe Kelly scored a terrific third goal for the newly crowned Harte Cup champions with five minutes gone in the second half.

In other GAA news the ladies football success story in Longford continued with wins for Killoe and Carrickedmond in the Leinster Club Championship.

Killoe beat Stabannon Parnells (Louth) 5-12 to 3-14 in the Leinster Intermediate quarter-final at Emmet Park while Carrickedmond made the long journey down to Wexford and came away with a commanding 2-15 to 1-6 win over Fethard St Mogues in the Leinster Junior quarter-final.