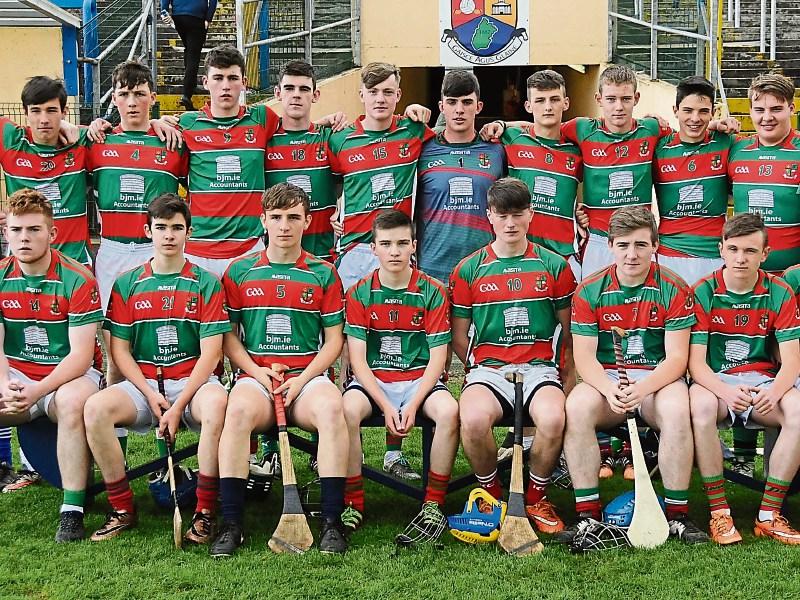 In the end the victors had 11 points to spare but it could have been much closer had Slashers taken their chances during a first half spell of over 20 minutes in which Wolfe Tones failed to score.

When referee, Kevin McGeeney, threw in the sliothar at the start of game amid a torrential downpour it looked as if the weather would dictate the game but as the elements improved so too did the hurling and both sides served up a fast flowing entertaining game.

The first chance of the game fell to Slashers but following a narrow miss it was Wolfe Tones who opened the scoring with a pointed free from Padraic Joyce after 3 minutes and the same player followed up soon after with a fine point from play and when full forward Shane Campbell pointed to open up an early 3 point lead it looked ominous for Slashers but Tones did not add to their tally for another 21 minutes.

Slashers dominated the game during this period and the lively Conor Gallagher opened their scoring on 10 minutes with a pointed free and he narrowed the gap to the minimum with another well taken free on 12 minutes. Gallagher was causing problems for full-back Joe Gaffney and he almost goaled from a tight angle on 23 minutes.

At the other end chances were scarce although Evan Murphy went close before Padraic Joyce ended the drought with another free. Both sides were settling into the game at this stage but it was Dylan Cassidy of Wolfe Tones who got a decisive score on 27 minutes with a well-taken goal following a pinpoint pass from Daniel Connell.

Slashers immediately threatened at the other end but a goal bound shot from Rory Maher was blocked with Conor Gallagher pointing a resultant free when no advantage was accruing and he added a further point from play just before half time bring his tally to 4 points.

Padraic Joyce got the last score of the first half with an excellent point from play, also accounting for 4 points of the Wolfe Tones  total. The teams went into the break with the Mostrim side leading by 1-5 t0 0-4 and all to play for.

Wolfe Tones got the perfect start to the second half with an early Joyce free after Evan Tully was fouled. Shane Maguire responded for Slashers with a good effort from play, keeping the gap at 4 points. The introduction of Paddy Hanley as well as some positional changes seemed to swing the game in Wolfe Tones favour as they added five points to Slashers one in a decisive  ten minute spell to double their advantage to 8 points.

Padraic Joyce was on fire during this period and got all of the scores, three of these were from frees and the other two from play with great build-up play from Dylan Cassidy and PJ Masterson.

Paul Leonard and Stephen Farrell were solid in defence for Slashers but Wolfe Tones were now showing their true potential and the Slashers forwards were being starved of possession. Conor Gallagher was unlucky to drag a couple of frees wide while Daniel Connell flicked the ball over the bar for Wolfe Tones when a goal looked certain.

Credit must be given to Matthew Duffy in the Slashers goals who prevented several goal chances. Daniel Connell got his second point of the game on 60 minutes, an excellent long range effort which was to be the last score of the game.

It was a well deserved victory for Wolfe Tones under the management of Bernie Connell, Willie Browne and Alan Wade and while Slashers will be disappointed with the result they should be confident of continuing the great work being done by their manager Niall Ward.