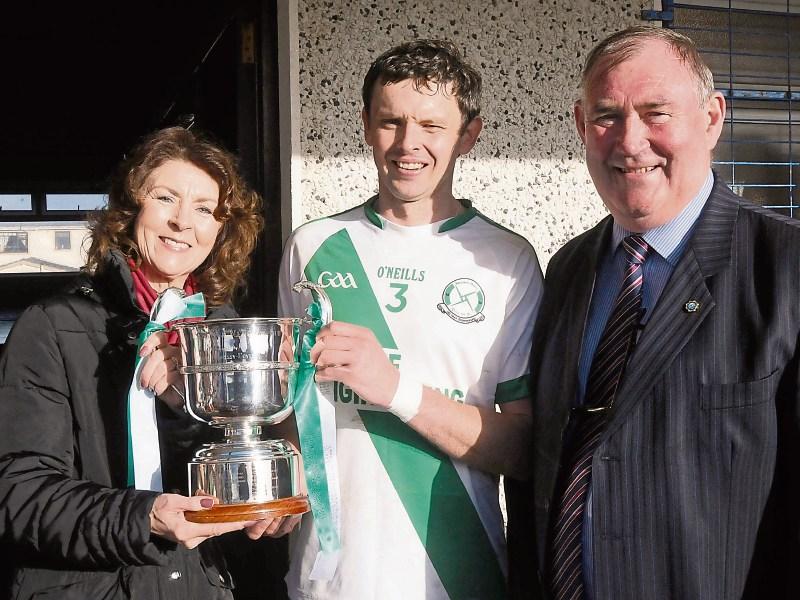 Hurt by the bitter disappointment of losing to Rathcline in last year’s final, St Brigid’s Killashee were in no mood to suffer a similar fate in the 2016 Intermediate Football Championship title decider and they showed the greater hunger to conquer Cashel at Glennon Brothers Pearse Park on Sunday last in front of the  1000 plus attendance.

After playing poorly in the first half and who were fortunate to be on level terms at the break (0-3 to 0-3), St Brigid’s had the advantage of the wind on the changeover and gradually asserted their superiority on their way to winning by the comfortable margin of eight points in the finish.

Deadlocked at 0-5 apiece when Conor Farrell landed a terrific score for Cashel in the 38th minute, the prospect of a possible draw was looming large but Killashee then stepped up another gear to fire over three points in a row - the first a fine effort from Mel Shanley in the 40th minute with Cillian Lee, Johnny Casey and influential substitute James Willis involved in this slick move.

A brace of frees were then converted by Willie Skelly in the 42nd and 48th minutes and after Aidan Rowan missed a costly free for Cashel the killer blow was struck by Killashee when Darren Carberry got the decisive goal in the 55th minute from a penalty that was awarded for a foul on Francie Dolan.

Things got even better for St Brigid’s as further points followed from Willie Skelly (free) and Mel Shanley, the latter on target from a tight angle for his third point from play. Mel must have been a close contender for the man of the match award that went to resolute defender Gerard Evans who proved to be a most inspirational captain.

Cashel grabbed a late consolation score when a close range free from Aidan Rowan clipped the crossbar on its way over in the 58th minute but it was Killashee who had the final say when Willie Skelly was on target from play (a fine strike) in the fourth minute of stoppage time to emerge as the chief marksman with six points (five frees) to his credit.

Veteran Willie, at 38 years of age, played a leading role for St Brigid’s throughout  this successful championship campaign as his club won the Intermediate title for the first time since 2011 and for the fourth time in all.

Courageous corner-back Shane Cosgrove and another dependable defender Johnny Casey were much to the fore for Killashee in the county final, along with the rock solid Gerard Evans at the back. Michael Farrell put in a lot of hard work around the middle of the field in creating a number of scoring chances and he figured prominently throughout the game.

Let’s not forget the significant contribution of the St Brigid’s manager Ray Curley in plotting the downfall of Cashel, most notably the shrewd move of pitching Emmet Skelly in direct opposition to the main Cashel man Andrew Farrell in this effective marking job.

While Cashel suffered a setback when one of their key players, Ger Dennigan, was forced to retire injured in the 25th minute there was also a blow for St Brigid’s when Kealan Cox was dismissed for a black card offence deep into first half stoppage time.

It might have been a different story had Dennigan not missed a great chance of a goal as early as the 3rd minute and wasteful Cashel were guilty of kicking six more wides in the first half as compared to three for Killashee.

There was another crucial moment in the game when Andrew Farrell had a goal attempt well saved by St Brigid’s keeper Pat Farrell in the 22nd minute so it would be fair to say that Cashel should have been in front at the break after playing with the wind.

Andrew Farrell got their opening score with less than a minute gone in the game but back came Killashee to register three points in succession from frees converted by Francie Dolan and Willie Skelly (2) to lead by 0-3 to 0-1 approaching the end of the first quarter.

Cashel then gained control and after Padraig Farrell landed a point in the 20th minute the sides were level when Gary Kenny fired over a free in the 26th minute.

That was as good as it got in a very scrappy first half and Kenny was on target again in the early stages of the second half when he kicked a terrific point from play, only for Killashee to level matters when Willie Skelly and overlapping defender Shane Cosgrove were involved in the move that led to Mel Shanley shooting over the bar in the 36th minute.

Another point from the lively Francie Dolan almost immediately put St Brigid’s back in front and while Conor Farrell fired over the equaliser for Cashel soon after they then faded badly and were well beaten in the end after  shooting five more wides in the second half.

Killashee were dominant in outscoring the opposition 1-6 to 0-1 during the remainder of the match in the process of gaining sweet revenge for the defeats by Cashel in both the 1999 and 2008 Intermediate finals.