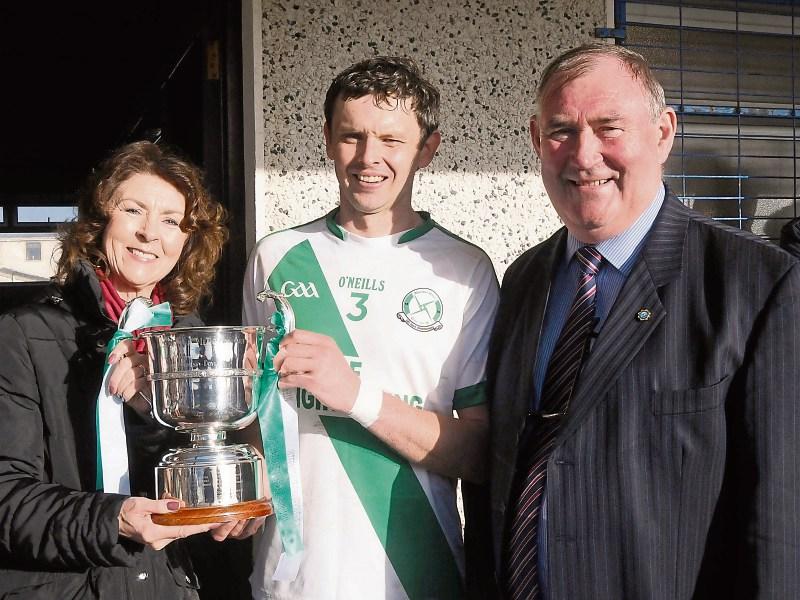 On Sunday last St Brigid’s Killashee captain Gerard Evans was presented with two prizes after he was named man of the match in his side’s eight point win over Cashel in the Intermediate Football Championship Final.

The personal accolade was nice but the prize he longed to get his hands on was the Gerry Hennessy Cup. Speaking to the Leader after the game Evans said: “The cup was the main one for me. Every player stood out there in the final; it could have been anyone’s man of the match award. The Man of the match award is nice but the proudest trophy to collect  was the Gerry Hennessy Cup.”

Evans believes Sunday’s success was the culmination of three years of hard work within the club under various managers who all played their part in the win. “This has been coming over the last three years. When Colm McGlynn took us over we put in a serious effort, then Tony McKiernan and now under Ray Curley we have finally got there. It was three years in the making.”

On Sunday St Brigid’s  came of age. After losing last year’s final they used the hurt felt in that defeat and then the experience from the Leinster Junior campaign to drive them on. “We were hurting last year when we lost. We regrouped and took the Leinster campaign on. It helped us to stick together and drove us on. We got to a Leinster Final and that campaign stood to us. Playing football in dirty weather, that time of the year and playing in big games. There is nothing better than playing in big games and that really helped us on this occasion. “

It was always going to be a tough battle between these two neighbouring clubs. Evans praised Cashel for their performance and also referee Fergal Kelly for his handling of the game.

“Fair play to Cashel they really got stuck into us and made us work hard. There were a few hard tackles and hits and Fergal Kelly let the game flow. We were lucky to build up a lead in the second half. The lads really stood up there and didn’t allow Cashel back into the game. “