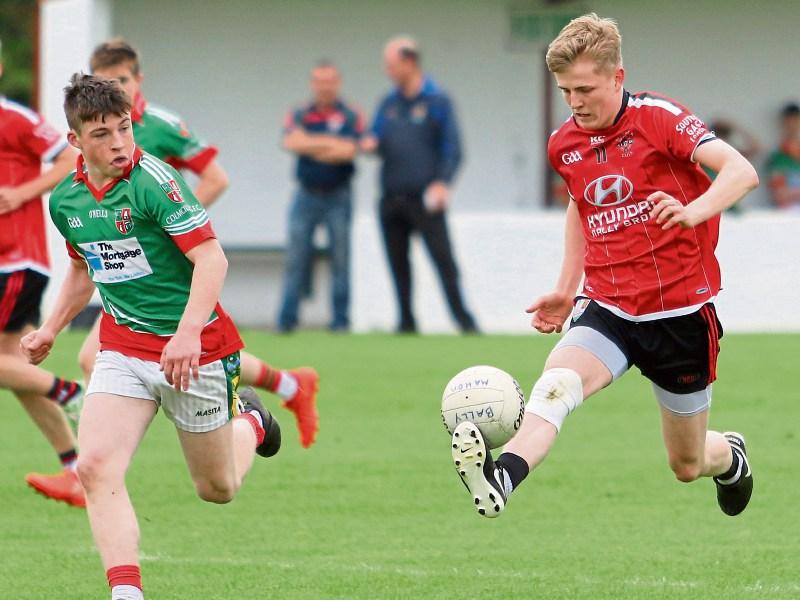 After suffering the bitter disappointment of a slender two points defeat against Northern Gaels in last year’s U-18 title decider, Killoe Og are back in yet another Minor Football Championship Final and will be hoping to go one better when they take on Shamrock Gaels at Glennon Brothers Pearse Park on Sunday next.

When the teams clashed in the group stage of the current campaign, Killoe were under considerable pressure to get a result after losing to Longford Slashers in the opening round by the minimum of margins but they showed a lot of character in overcoming the amalgamation comprising the Ballymahon/Forgney Gaels and Southern Gaels (Cashel/Killashee) underage clubs.

Killoe qualified automatically for the Harte Cup decider on the head-to-head rule, leaving Shamrock Gaels to battle it out with Colmcille in the semi-final.

The Ballymahon/Cashel/Killashee combination were in control from the start and dominated the first half to establish a commanding 1-10 to 0-3 lead at the break.

Colmcille, to their credit, came a lot more into the game on the changeover but Shamrock Gaels never looked like letting victory slip from their grasp and came out on top by the comfortable margin of eight points, 4-14 to 3-9.

That was a most impressive tally in moving a step closer to creating a piece of Longford GAA history as the Shamrock Gaels amalgamation were only created last year and could end up winning the Minor Championship title.

Leading the charge for glory will be Ballymahon’s Joe Kelly (outstanding for the county minors this year), Cillian Lee (Killashee) and Cashel duo Ronan Healy and Michael Burke while back in action after a lengthy injury absence is Mark McCormack (Ballymahon).

Longford minor goalkeeper Jack Fox (Ballymahon) is being utilised in a target man role at full-forward while Dylan Farrell (Killashee) played a prolific role in the semi-final win over Colmcille in clocking up a total of six points (three frees).

The key figures on the Killoe team are Shane Thompson, David McCarthy, Oisin Bennett, brothers Brian and Liam Harte, Niall Farrelly, Conor Moran and Gavin Hughes, who are all capable of making a big impact in the eagerly awaited final on Sunday.

While Shamrock Gaels scored a comprehensive 3-11 to 0-9 success when the sides clashed in the Minor League Division 1 Final at Pearse Park back in July, Killoe were without a few players then and will be a different proposition at full strength.

Revenge was gained in the group stage of the championship but it now boils down to the match that really matters with a tight contest probably in prospect to determine the destination of the Harte Cup.

On the basis that Shamrock Gaels would appear to have the better individual players in county minors Joe Kelly, Cillian Lee and Ronan Healy (the latter hampered by a hand injury) they may just have the edge over Killoe Og in what promises to be a highly entertaining encounter.