Paint the town blue and gold - champions expected in Longford town between 6.30 & 7pm 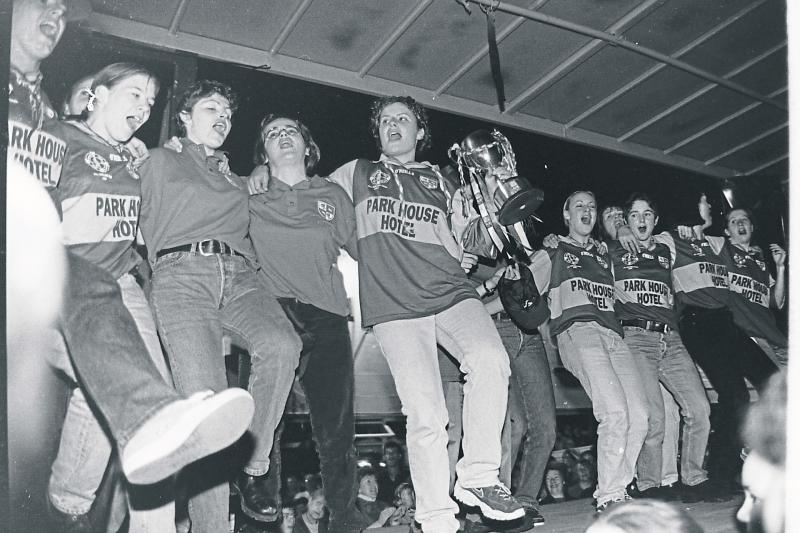 Dara Gill (with the trophy) and members of the Longford ladies celebrating back in 1997 during the homecoming reception for the victorious squad.

A rousing homecoming reception and hooley is planned this evening for Longford’s newly crowned All-Ireland champions.

‘Paint the county blue and gold for the girls’ is the rally cry as the triumphant Longford ladies football squad, management and Co Board officials will return home with The West County Hotel Cup after their magnificent 4-10 to 1-12 victory over Antrim in the TG4 All-Ireland Junior Championship Final at Croke Park earlier today.

The cavalcade is expected to reach Longford town between 6.30 and 7pm approximately, and beforehand there will be a brief stop at Edgeworthstown.

Following a tour of the county town with the coveted silverware, the players and mentors will continue their celebrations with a victory dinner at 8pm in Longford Golf Club.

Show your support for the players, led by captain Mairead Reynolds, and the management, led by Miceal Bohan, by coming out and cheering on the new All-Ireland champions.

The last time Longford were All-Ireland Junior Champions was in 1997, when captained by Dara McGann (née Gill), they defeated Tyrone by 2-12 to 1-11.

Today, when the chips were down at half time and Longford trailed by 0-5 to 1-8, Dara advised the players, “we waited this long - don't let it pass".

And her words of wisdom were certainly heeded as Longford produced a stunning second half performance to outscore Antrim by 4-5 to 0-4.

It was a 33rd minute goal by TG4 Player of the Final Jacinta Brady that proved the catalyst for the floodgates to open. Further goals followed from Emer Heaney, Aoife Darcy and Aishling Greene and Longford were worthy champions.