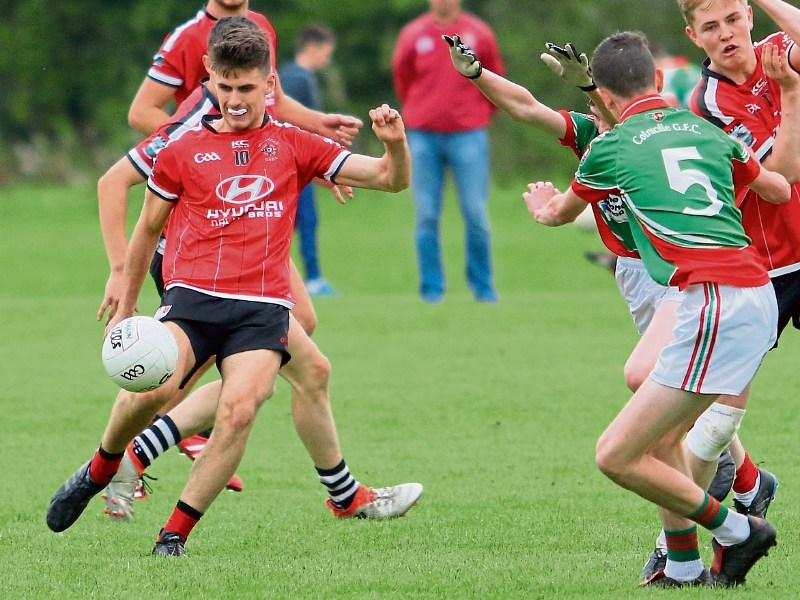 As was expected Shamrock Gaels (the amalgamation of Ballymahon/Forgney/Cashel/Killashee) booked their place in the Minor ‘A’ Football Championship Final for the first time in their history, with eight points to spare over St Colmcille’s on Saturday afternoon last in Devine Park, Edgeworthstown.

It had been going well for the amalgamated side but a comeback, of sorts, from the Colmcille side put some respectability on the scoreline.

If the North Longford side had started as well as they finished this game would’ve been a lot tighter.

Shamrocks had the calibre of players like Joe Kelly, Ronan Healy, Cillian Lee and Michael Burke in their ranks and this quartet were very influential in this historic win.

The opening minutes were tight with Shamrocks taking an early two point lead before Rory Hawkins got on the scoresheet for Colmcille with a fine point.

Shamrocks then took control of the game and aided by the wind they registered scores on the board.

Points from Joe Kelly and Dylan Farrell (two frees) gave them a five point lead in the 13th minute. Kelly had a goal chance in the eighth minute but blasted his effort wide.

A goal from Killashee’s Cillian Lee in the 15th minute extended the lead to nine points. Colmcille had been struggling to get into the game and just got two points in the final 10 minutes of the second half; frees from Hawkins and Ciaran McKeon.

Shamrocks ended the half hitting over three points to give them a 10 point lead going in at the break; 1-10 to 0-03.

Hawkins got the opening point of the second half but Shamrocks replied with a well-taken free from Healy. After being completely out of the game Colmcille got a goal in the 38th minute through Mark Kiernan to cut the deficit to seven points.

Shamrocks though were 10 points ahead again in the 41st minute when Aaron Nally scored a terrific goal. Hawkins fired over a lovely point before Nally got his and his side’s third goal in the 44th minute to extend his side’s advantage to 12 points.

Frees were exchanged between Kelly and Hawkins before Shamrock’s got their fourth goal of the contest when two substitutes combined; Mark McCormack to Patrick Farrell and he made no mistake.

Kelly (free) and Farrell added more points to put their side further ahead but that was to be their last score of the game.

In the final five minutes Colmcille grabbed two goals in quick succession. Colin Sexton got their second goal in the 52nd minute and three minutes later Dylan McCabe scored with a fantastic strike.

They tried to get a fourth but Shamrock’s defended well. McKeon hit over late frees for Colmcille as they fell to a disappointing defeat.