Mostrim's Wolfe Tones are through to yet another senior hurling final 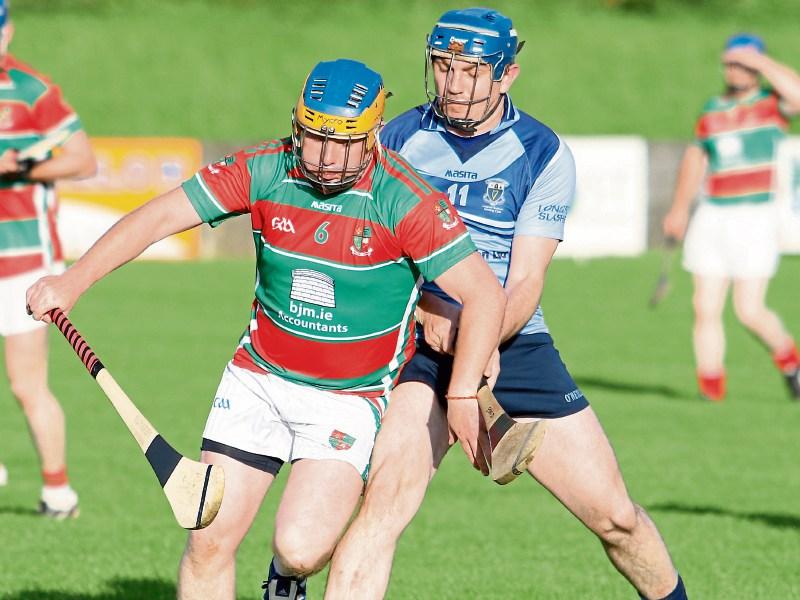 Wolfe Tones have enjoyed a tremendous record in the Senior Hurling Championship and are through to yet another county final after beating Longford Slashers in the Round 3 clash at Allen Park on Saturday evening last.

While the Mostrim side made hard work of winning the match after shooting several wides and were fortunate in that Slashers fail to take the goal chances they created, the title holders did enough to clinch their place in the 2016 decider against Clonguish Gaels in a couple of weeks.

The teams were on level terms with ten minutes of normal time remaining with Slashers still in with a shout of getting the two points victory they required to reach the final but Wolfe Tones then stepped up another gear to establish a tight grip on this interesting encounter.

A point apiece from Seamus Hannon and John Newman (a well struck long range free) was followed by a decisive goal as John Mulhern found some space to weave his way through to finish the ball to the back of the net in the 52nd minute.

That left Slashers trailing by 2-9 to 2-4 and while they battled back to close the gap with a point from Simon Davis, along with a couple of frees converted by Eoin Donnellan, their hopes were eventually dashed when Seamus Hannon scored a killer third goal for Wolfe Tones in the 58th minute.

A point from Mark Tully extended the advantage for the reigning champions and Slashers got a consolation score in stoppage time when their chief marksman Donnellan was on target from play to bring his total to 1-7.

Donnellan converted a penalty for the goal in the 8th minute of the first half after he had fired over a free while the opening Wolfe Tones score was a point from Seamus Hannon.

But Slashers managed just one more point during the remainder of the first half, Donnellan (free), while Wolfe Tones landed four scores in a row - three from John Mulhern (two frees) with Daire Duggan also on the mark.

With the sides all square, John Newman scored a cracking goal right on the stroke of half-time to leave Wolfe Tones leading by 1-5 to 1-2 at the break but it was a deadlock situation again with three minutes gone on the changeover.

The physically strong Slashers full-forward Michael Morrissey created the opening for Reuben Murray to score the equalising goal and soon after Morrissey burst through with a great chance of finding the net but he shot wide.

Seamus Hannon was then narrowly off target with a goal attempt moments later before Martin Coyle landed a point to put Wolfe Tones back in front.

Then two Slashers chances in quick succession fell to Michael Morrissey but his shots were saved by the opposing keeper Andy Kelly and following an exchange of points between Eoin Donnellan (‘65) and Paddy Cullen, a free converted by Donnellan in the 43rd minute left it level again (1-7 to 2-4).

Some more chances were squandered by both sides but Wolfe Tones eventually began to assert their superiority as they outscored Slashers 2-3 to 0-4 during the remainder of the match.