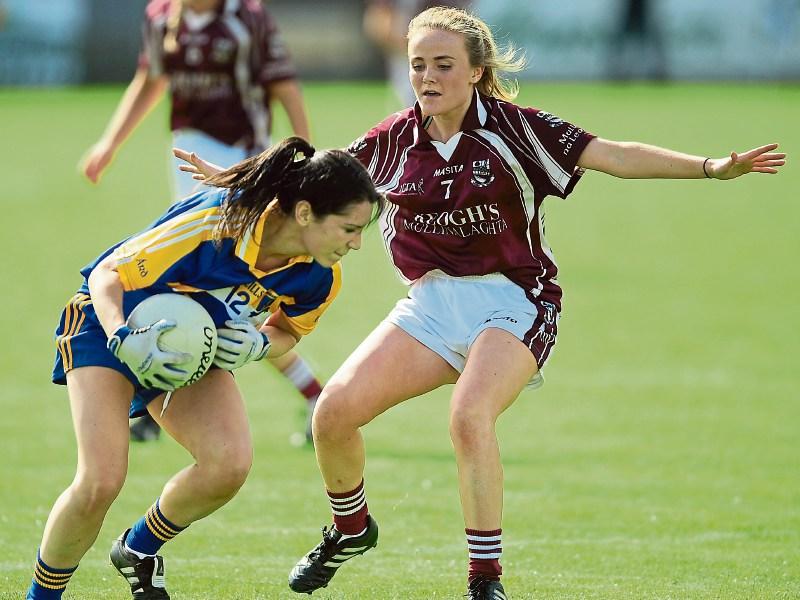 Dromard eventually got the better of Mullinalaghta in a  highly entertaining Junior ‘A’ Ladies Football Championship Final at Glennon Brothers Pearse Park on Saturday last with the narrow margin of just two points separating the sides with five minutes of normal time remaining.

Then came the crucial score that settled the issue as Dromard were awarded a penalty in the 57th minute for a foul on Rebecca Maguire, resulting in a yellow card for Lisa Mooney who was subsequently sin binned as Mullinalaghta ended the match with 14 players on the pitch.

Up stepped Michelle McManus to take the penalty with her shot clipping the post as the ball ended up in the back of the net and while a free converted by Lauren Burke gave Mullinalaghta a glimmer of hope, Dromard made absolutely certain of their success when Rebecca Maguire raced clean through to score her fourth goal.

Two more points followed from midfielder Mairead Reynolds as Dromard ran out comfortable winners in the finish but credit to Mullinalaghta for making it so difficult for the favourites and there was some consolation when their excellent forward Lauren Burke received the player of the match award.

Burke clocked up the impressive total of 2-7 (four frees) for the gallant losers and it was the No. 13 on the Dromard team, Rebecca Maguire, who really stood out for the newly crowned county junior champions with the shooting star registering a terrific tally of 4-4 and all from play.

Maguire played a major role in the triumph and while her side got off to a bad start to trail by 1-4 to 0-1 at the end of the first quarter, the course of the game gradually changed as Dromard led by the minimum of margins at the break, 2-6 to 2-5.

The goals were scored by Cait Murphy and Rebecca Maguire in the space of a minute while the points were fired over by Sarah Reynolds, Maguire (2), Laura Martin (2) and Helen Conefrey.

There was no stopping the Mullinalaghta No. 13 Lauren Burke who scored 2-4 in the first half and she was a constant threat with some other goal chances coming her way. Burke got the first goal in the 6th minute and found the back of the Dromard net again in stoppage time.

The other Mullinalaghta point in the first half was landed by Lisa Mooney and the ding-dong battle continued on the changeover with Dromard - now with the advantage of the wind - guilty of squandering a number of goal chances that were saved by the opposing keeper Shannon McIntyre.

Having said that, Dromard netminder  Michelle Kilkenny produced a great save to stop a goalbound shot from Lauren Burke in the early stages of the second half.

A  couple of mistakes gifted Dromard their third and fourth goals in the 38th and 50th minutes, both scored by Rebecca Maguire, and that left them 4-7 to 3-8 ahead with Maguire also getting a point.

Carmel McGivney fired home a cracking goal for Mullinalaghta in the 37th minute, along with a point apiece from Lisa Mooney, Lauren Burke and Rachel Gilligan that left their side leading by 3-8 to 3-7 before Rebecca Maguire got another goal to put Dromard back in front.

A point apiece were then exchanged between Mairead Reynolds and Lauren Burke (free) before the decisive penalty materialised and that proved to be the killer blow for Mullinalaghta who tried realy hard to spring a surprise.