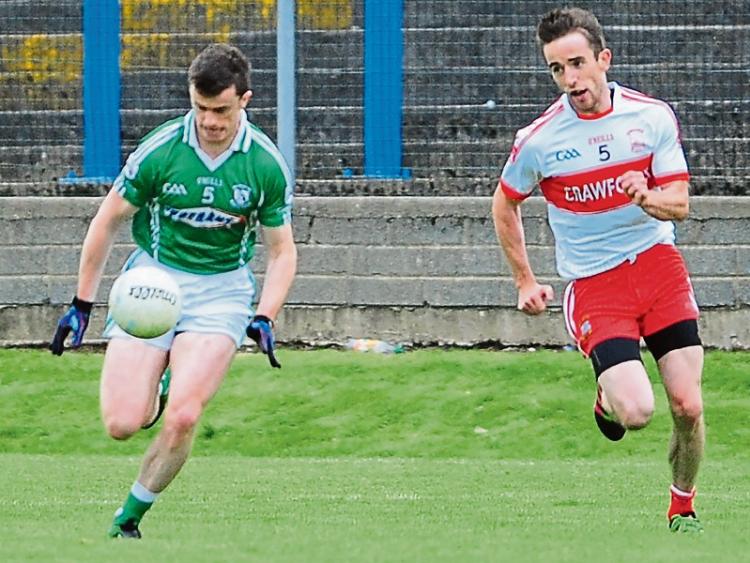 Three late points from Robbie Smyth (one free) swung the issue in favour of Abbeylara as they advanced to the Senior Football Championship semi-final at the expense of Clonguish in a close encounter at Glennon Brothers Pearse Park on Sunday evening last.

This was always going to be the tightest  of the four quarter-finals and the sides were level going into the final quarter of the game. Clonguish then lost midfielder David Faughnan when he received a second yellow card for a foul on Conor Berry and Abbeylara capitalised on the numerical advantage.

Clonguish had chances in those final 15 minutes but made a number of costly errors which allowed Abbeylara win possession and they also hit a number of wides when they were in need of scores.

In the first minute of stoppage time Robbie Smyth fired over his sixth point of the game to put Abbeylara ahead by three. Clonguish did try and salvage a draw in the hope of snatching a last gasp goal but the only score they got was a pointed free from Paddy Dowd.

The weather certainly played its part in this game with both sides struggling with the strong wind but Abbeylara adapted better in kicking five points against the difficult elements in the second half.

Three minutes were gone on the clock when William Crawford opened the scoring for Abbeylara. Jason Kelly then hit over a free before a lovely point was landed by Robbie Smyth  in the 11th minute.

Clonguish’s first score was a neat point from Ciaran Williams in the 14th minute. Kevin Smyth restored Abbey’s three point advantage in the 15th minute and one minute later Conor Berry had a goal chance but opposing keeper Stephen Watters was alert to the danger.

The game was then held up for over 10 minutes when Clonguish defender Stephen McLoughlin went down after a robust challenge from Jason Kelly and had to go off on a stretcher and was replaced by Paddy Dowd.

Clonguish were the better side when the game restarted and created a lot of attacks with David Barden very instrumental. Four times Abbeylara conceded frees which Joe O’Brien duly pointed  and in the sixth minute of stoppage time he put his side ahead for the first time.

One minute later a Robbie Smyth free left Abbeylara level. O’Brien then had a goal chance but Michael McHugh did very well to deflect his effort out for a ’45 as the sides went in at the break all square; 0-5 to 0-5.

Abbeylara went two ahead in the opening minutes of the second half with a good point from the hard working James McEntire and another free from the boot of Robbie Smyth.

Down the other end Joe O’Brien was on target again, hitting over his fifth free for Clonguish.

Abbeylara created another goal opportunity in the 44th minute but Clonguish keeper Stephen Watters was quick off the line to clear the ball away from Sean Murphy.

The sides were level again in the 44th minute when Joe O’Brien hit over a fantastic point from about 50 yards out; his first from play. One minute later the game changed when Clonguish midfielder David Faughnan was sent off for a second yellow card.

With the advantage of the extra man, Abbeylara went in search of scores with Robbie Smyth firing the ball over the bar in the 48th minute when a goal was on.

Two more points from Smyth (one free) gave Abbeylara a three point lead in stoppage time and Clonguish were unable to rescue the situation in making their exit from the championship.