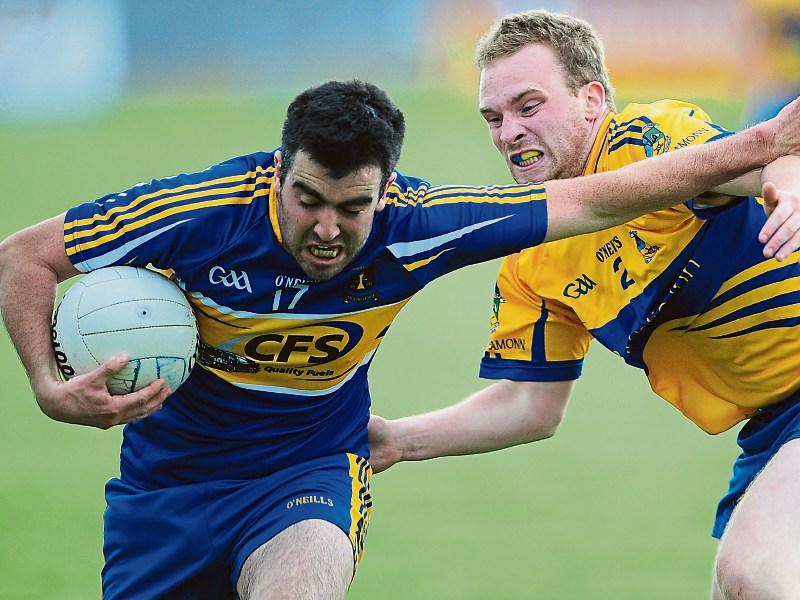 Making good use of the very strong wind in the first half, Dromard inflicted a lot of damage to establish a commanding 0-13 to 0-3 lead at the break in cruising to a comfortable victory over Carrickedmond in the Senior Football Championship quarter-final at Glennon Brothers Pearse Park on Sunday  last.

That advantage was increased with a further point apiece from Declan Mimnagh and Francis McGee in the early stages of the second half and McGee was then most unlucky not to score a goal when he blasted a cracking shot against the crossbar.

Dromard then faded right out of the game in failing to register another score until the 55th minute as the underdogs Carrickedmond battled back to make sort of impact. After Marty Mulvey had landed  a point, Ger Carberry’s charges got a badly goal in the 39th minute when substitute Padraig McGrath shot to the back of the net.

McGrath was only on the pitch a couple of minutes when he latched on to a long ball in from Barry O’Farrell to hit the target and when Paddy Farrell shot over the bar midway through the second half the gap was closed to seven points, 0-15 to 1-5.

Wind assisted Carrick could have put some more pressure on Dromard but for kicking four wides in a row and were unable to get another score in the final quarter of this scrappy contest.

Sean Hagan’s side gradually awoke from their slumber to dominate the closing stages with Ross McNerney converting a free and Cian Mimnagh was denied a goal when the Carrick keeper David Shannon produced a fine point-blank save in the 56th minute.

Diarmuid Masterson then burst through but was stopped in his tracks by Barry O’Farrell who received a black card for the foul and up stepped McNerney to fire over the resulting free for the final score of the game.

While Dromard will have learned little from this exercise and could have done with a tougher task as they now prepare for the championship semi-final against Abbeylara, they looked sharp in the first half with Francis McGee the influential playmaker at centre-half-forward.

Apart from setting up a number of scores with his clever distribution of the ball, McGee kicked over five points (two frees) while Cian Mimnagh also figured prominently up front with four points to his credit.

Ross McNerney registered a brace (free and play) while Declan Mimnagh (a delightful effort) and Jamsie Martin were also on target for Dromard in a very one-sided first half.

Most of the scores were excellent efforts and Carrickedmond trailed by 0-11 to 0-0 before they eventually opened their account in the 22nd minute when Mark McDonnell converted a free.

Moments later Marty Mulvey landed a brilliant point from a tight angle against the strong wind and the qualifiers from the controversial composition of Group 3 that contained the weaker teams in the championship got another score in the 25th minute through Keith McGuire (free).

But back came Dromard to hit two more points before the break with the chief marksmen Cian Mimnagh and Francis McGee shooting over the bar and there was no way back for Carrickedmond who were fighting a losing battle in the second half.