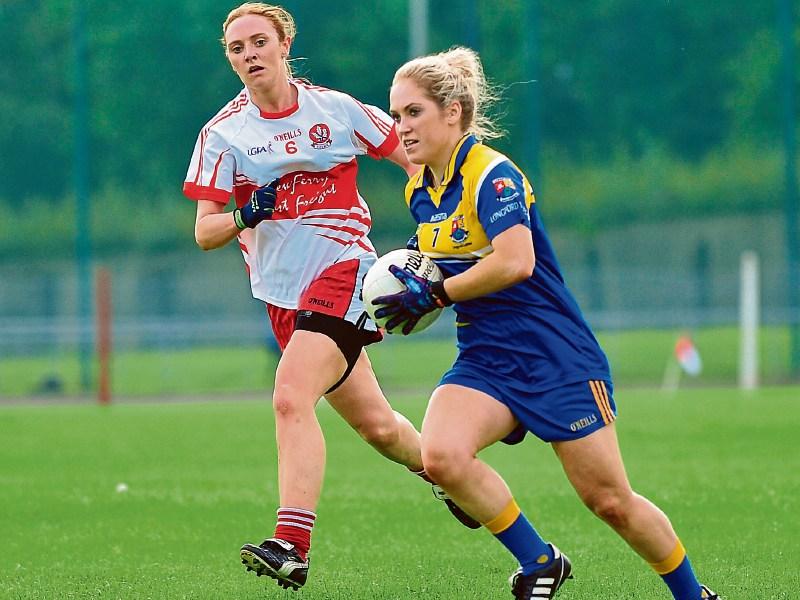 Not being over confident but the Longford Ladies always knew they would beat Derry and advance to the All-Ireland Junior Championship Final at Croke Park.

What they didn’t expect was the landslide winning margin of 50 points and it could have been even worse for dreadful Derry with Longford opting for points instead of goals in this mis-match at the Fingallians GFC grounds in Swords, Co Dublin on Sunday last.

Speaking to the Leader after the game Longford manager Micheal Bohan admitted that nothing was really learned from this win: “We learned nothing. They were actually worse than when we played them in the National League earlier in the year. They gave us a good battle back then. We were leading well in that game but for 20 minutes in the second half they took the game to us. I don’t know what happened with them since then.

Bohan and his management team wanted the girls to take the game to Derry and they did just that. He said: “The girls from the start to finish kept going and never gave up. Even when they were so far ahead. Just like the game against Carlow, they just drove on. We could bring on five substitutes on Sunday last and there were more we could have brought on.”

Emer Heaney (who was the top scorer in the game with a total of 3-6) and Laura Burke found the back of the net again to give Longford a comprehensive lead at the break; 8-13 to 0-2.

Bohan wanted his side to be relentless and continue that ruthless streak in the second half. “At half-time we said to them to keep going and keep pushing on. You can’t play for 30 minutes in Croke Park, you have to play for over 60. But you can only play what’s in front of you,” Bohan said.

Longford decided to make changes in the second half but unlike the league they were limited to just five substitutes in this championship clash. They never let up on their scoring and added 13 more points to their tally along with a goal from Ger McManus.

Bohan was delighted with his side’s performance: “All the forwards scored and a few of the subs too and midfielders as well. We couldn’t fault anything. Everything went well for us.”

Antrim now provide the opposition for Longford in the All-Ireland Junior Final at Croke Park on Sunday September 25th, throw-in 11.45am, and they are facing a tough task against the Ulster side who hammered London 6-15 to 2-8 in the other semi-final in Swords last Sunday.

Bohan and his fellow mentors Seamus Mullen and Dara McGann had words of advice for his players before the Derry game.

“We said before the game to go out and not just play for themselves but all the girls who played over the last 19 years for Longford to the last time the All-Ireland Junior title was won at  Croke Park back in 1997. They did just that. These girls are in a great position playing in an All-Ireland Final but there’s a lot of players that kept ladies football going in Longford and never got their rewards.”