Mullinalaghta in total control in easy win over dismal Mostrim 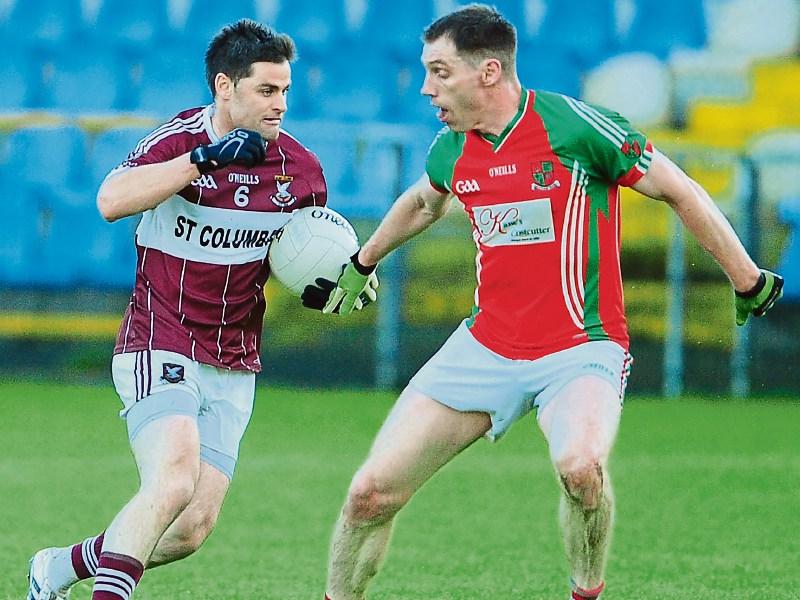 It was all too easy for Mullinalaghta who had the most emphatic margin of 11 points to spare over a dismal Mostrim outfit in this one-sided Senior Football Championship quarter-final played in difficult wet conditions at Glennon Brothers Pearse Park on Saturday evening last.

Despite the almost constant downpour throughout the first half, making it very uncomfortable for the spectators, St Columba’s fired over some great scores on their way to establishing a comfortable 0-12 to 1-3 lead at the break and there was little chance of the Group 3 table toppers Edgeworthstown springing a surprise.

Even the boost of a rather bizarre goal that was directed to the Mullinalaghta net by the fist of Darragh Doherty with 12 minutes gone on the clock failed to give Mostrim a lift and they never got going against a physically stronger St Columba’s side who were on top in virtually every position on the pitch.

Mickey Graham’s side were dominant right from the start and raced into a comfortable 0-5 to 0-0 lead, the first score coming from the boot of Jayson Matthews direct from the throw-in (after about 30 seconds to be precise) and further points followed from James McGivney, wing back Donal McElligott (an excellent effort), Matthews (free) and Gary Rogers.

Stunned Mostrim were in a state of shock and while there was a brief respite from the St Columba’s onslaught with Brian Farrell converting a ‘45’ in the 11th minute and then the goal from Darragh Doherty moments later, Mullinalaghta regained the upper hand to shoot seven more points during the remainder of the first half.

Prominent midfielder John Keegan fisted the ball over the bar in the 15th minute and the other scores were registered by James McGivney (2), David McGivney (2), James Mooney and Jayson Matthews (free) to leave Jack Lynn’s charges facing a real uphill battle in the second half.

A point apiece from Michael Hussey and Cillian Lynn (free) was the best they could do in the second quarter of the contest and St Columba’s extended their advantage when Michael Cunningham shot over the bar with a couple of minutes gone on the changeover.

Two more scores gradually followed from Jayson Matthews (free) and James McGivney before Mostrim staged a brief comeback that yielded 1-2, the points coming from Michael Hussey (free) and Darragh Doherty while Shane Kiernan got the goal in the 48th minute after receiving a pass from Doherty.

All of a sudden the gap was down to just four points (0-15 to 2-5), which was a false reflection on the actual trend of the game, but there was no need for Mullinalaghta to panic as Mostrim failed to register another score in producing what a very poor performance overall.

St Columba’s hit back with a glorious point from substitute Rian Brady in the 51st minute before the impressive James McGivney fired over a terrific strike in the 57th minute. Brady then kicked another score from a tight angle and was also involved in the slick move, along with James Mooney and Jayson Matthews, that led to McGivney planting a cracking shot into the back of the Mostrim net three minutes into stoppage time.

The rout was complete when John Keegan landed his second point and on the evidence of this ruthless display Mullinalaghta will believe that they stand a good chance of getting through to the county final for the second time in the space of three years.