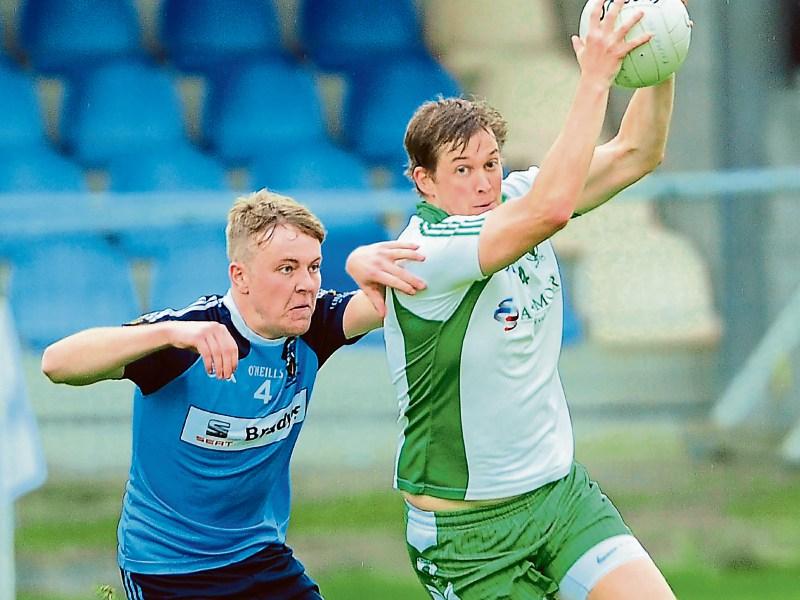 Despite their injury problems the title holders Killoe Emmet Og are still on course to complete a magnificent three-in-a-row of Senior Football Championship titles and are now through to the last four after getting the better of Longford Slashers in a keenly contested quarter-final at Glennon Brothers Pearse Park on Sunday evening last.

A big attendance in the region of 1,000 witnessed a close encounter between the old rivals who were clashing for the third time in the current Connolly Cup campaign. While the stronger Killoe squad found that little bit extra to come out on top in the finish it might have been a different story had the post not denied Colin Smith a certain goal with seven minutes gone in the second half.

The rebound broke to Conor Clarke, who blasted the ball over the bar to leave the sides all square (1-7 to 0-10), but Emmet Og were able to bring on substitutes in the calibre of Eugene Clarke and Sean McCormack (the latter back in action after injury) and the duo landed a point apiece as Slashers were outscored 0-5 to 0-2 during the remainder of this always interesting game.

Denis McGoldrick (free) and a brace of brilliant strikes from his brother Ronan earned Killoe a semi-final meeting with Mullinalaghta in a couple of weeks time and with Mark Hughes gradually recovering from his wrist injury the county champions are gathering momentum at the right time in a resolute defence of the county title.

The other two Slashers scores in the second half came from frees converted by Colin Smith and Eugene McCormack’s side (minus the injured Paul Kelly) were left to count the cost of kicking a total of ten wides throughout the game as compared to five for Killoe.

Emmet Og were sharper in attack with Larry Moran and the excellent Ronan McGoldrick (who fired over five points) proving to be a constant threat but particularly outstanding was the inspirational Padraig McCormack in the heart of the defence.

In going through a rebuilding process, Slashers have shown considerable promise this season and Robbie Clarke is a rising young star who showed great composure to fire home a cracking goal in the 18th minute after receiving the perfect pass from Colin Smith.

That left the sky-blues leading by 1-5 to 0-4 and seemingly in a good position to spring a surprise but the Killoe players are made of stern stuff and their response was most emphatic as they fired over six points in a row through Paddy Kiernan, Padraig McCormack (under a lot of pressure), Ronan McGoldrick (2), Denis McGoldrick (free) and Larry Moran.

Liam Hughes then squandered a great chance of a goal as his poorly struck effort was cleared by Barry Gilleran close to the line and just before the break Niall Mulligan landed a very good point to leave Slashers trailing by just the minimum of margins, 0-10 to 1-6.

Their other five points in the first half came from a Colin Smith brace (play and free) with Andrew Dalton, Brian Walsh and Robbie Clarke also on target while the four Killoe scores in the first quarter were registered by Larry Moran, Daniel Mimnagh, Denis McGoldrick (free) and Ronan McGoldrick.

Slashers suffered a significant setback when vastly experienced defender Peter Brady was dismissed after receiving a black card in the 12th minute and the same misfortune marked the departure of Emmet Og centre-half-back Ronan Keogh on the stroke of half-time.

The second half lacked the same sort of intensity with Killoe keeping ahead in getting across the line and their manager Declan Rowley will be pleased with the overall performance as they moved closer to yet another appearance in the senior championship final.