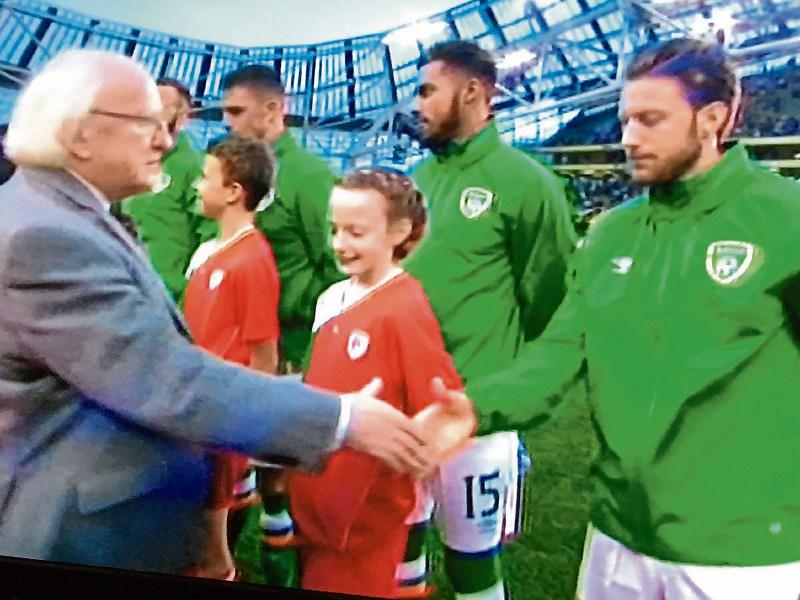 A Longford  girl had an important role to play in Robbie Keane’s final match at the Aviva Stadium, Dublin last Wednesday.

Saoirse McLoughlin, daughter of Marie and James, Ardagh, was one of the mascots who led the Irish team out onto the pitch ahead of the match, which saw our team secure a 4-0 win against Oman.

Saoirse’s mother Marie explained; “Saoirse entered and won an Ireland AM competition sponsored by 3. It was looking to see which child was Ireland’s biggest football fan.”

The 11-year-old, who is in sixth class at St Mel’s NS, Ardagh, sent in a photograph of herself with the Ireland cupcakes she baked during the European Championships earlier this year, and was delighted to be chosen from all the entries.

Donning an Oman shirt, Saoirse walked out alongside Cyrus Christie, the Derby County player, and got the opportunity to meet the players and President Michael D Higgins.

“I was very excited,” Saoirse grinned, admitting that she was a big fan of Robbie Keane and was thrilled to get to meet him last Wednesday. “I got to shake all the players’ hands. Robbie was very busy,” she added.

A sports fan herself - the talented young girl plays soccer with Ardagh Utd and gaelic with St Patrick’s Óg and St Brigid’s Gaels - Saoirse revealed that she would love to play in the Aviva herself one day.

It’s not her first competition win either, as Saoirse was the winner of the Leader’s Christmas art competition last year, where we asked the county’s children to send in pictures for our front page.

Saoirse, alongside her brother Devin, also won the national ‘Design an Official GAA Mascot’ competition hosted by the GAA in 2013. The siblings were invited to take to the pitch in Croke Park at half-time in that year’s All-Ireland semi-final between Dublin and Kerry to unveil the new mascot.