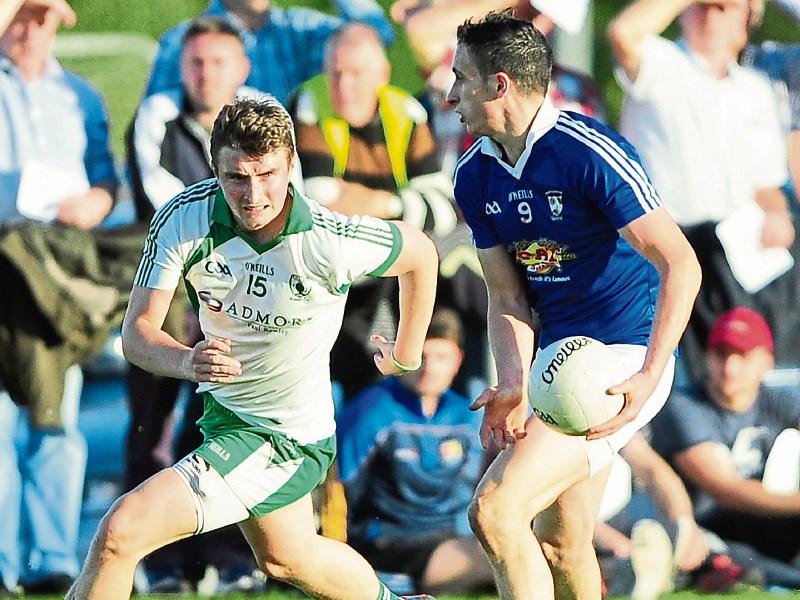 Goals at crucial stages of the game proved to be the decisive factor as the title holders Killoe overcame the gallant challenge of Granard in the remaining Group 1 fixture in the Senior Football Championship at McGee Park on Sunday  last.

This hard earned win guaranteed Emmet Og a place in the quarter-finals and another crack at Slashers and Declan Rowley’s determined side deserve a lot of credit for keeping alive their hopes of capturing the Connolly Cup for the third year in succession.

Already rocked by the injures to Michael Quinn and Mark Hughes, Killoe suffered a further setback with another key figure Sean McCormack (hamstring) also ruled out of the make or break clash against St Mary’s that attracted a big crowd to the Colmcille GFC grounds on a fine evening.

Played in perfect weather conditions, Granard got off to a great start to lead by 0-4 to 0-1 after 12 minutes following a brace of scores apiece from Conor Mallon (frees) and Liam Sullivan, the latter landing great efforts from play and who was posing a serious threat in the full-forward-line.

The solitary Killoe point came from Denis McGoldrick, although they should have scored a goal in the 9th minute when Paddy Kiernan shot wide from close range. And then the county champions were dealt another blow when Cian Farrelly was forced to retire due to illness midway through the first half.

A point from a free converted by Denis McGoldrick closed the gap before a pass from Padraig McCormack sent Liam Hughes racing through for a cracking goal in the 18th minute. At this same stage McCormack was switched from midfield to full-back in order to tighten things up in the Emmet Og defence.

Back came St Mary’s to level matters with another point from Conor Mallon (free) and a score apiece were then exchanged between Paddy Thompson (on target from a tight angle) and Liam Sullivan, a brilliant strike under considerable pressure.

Granard then lost injured corner-back Vinny Nally  and it was Killoe who regained the lead when prominent wing forward Liam Hughes burst his way through to land a very good point in the 27th minute.

Thus Emmet Og held a slender 1-4 to 0-6 lead at the break but were fortunate in that Larry Moran got away with a yellow card after clashing with Granard full-back Thomas Gallagher four minutes into the second half.

Two points in quick succession from half-time substitute Bernard Clyne and Paul Smyth put St Mary’s back in front but the game then swung firmly in favour of Killoe who enjoyed a defining dominant spell to clock up 1-4 between the 39th and 44th minutes.

Following a brilliant point from wing back Shane Dowd, further scores followed from Daniel Mimnagh and Denis McGoldrick (2) before Ronan McGoldrick flicked the ball to the net for the second Emmet Og goal after connecting with a pass from Mimnagh.

All of a sudden Killoe were 2-8 to 0-8 in front but failed to register a score in the final quarter of this tense and entertaining contest as they sat back on the cushion of their comfortable lead.

Depending a lot on midfielder Darren Gallagher, it must be said that Granard tried extremely hard to rescue the situation and closed the gap with a point apiece from Liam Sullivan and Gallagher (free) before Darren was denied a goal when his point-blank shot was very well saved by Killoe keeper Shane Fitzpatrick in the 54th minute.

Moments later another substitute David Blessington landed a point and while Darren Gallagher fired over a free in the 60th minute time ran out for St Mary’s.

The losers hard luck story was complete when they ended the game with 14 players after Jody Connolly, brought on in stoppage time, was hardly on the pitch when he was sent-off after receiving a red card from referee Aidan Dowler.

Granard are now out of the championship as Killoe held on to win by just two points  but they will still  prove difficult to beat despite their injury problems.