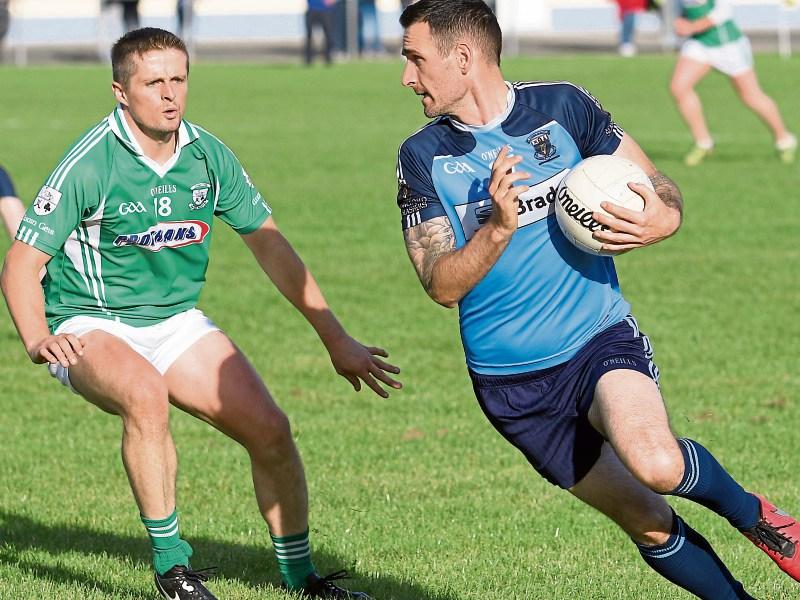 With their places in the quarter-finals already secured, the top spot in Group 1 was the only thing to play for as Longford Slashers and Clonguish made several changes for this Senior Football Championship game at Pairc na nGael on Sunday evening last.

There was nothing much between the sides throughout the game with the lead changing on a number of occasions. With five minutes of normal time remaining the game was finely poised when a free from Colin Smith drew Slashers level.

Minutes later a fine move saw substitute Andrew Kelly find the back of the net for the crucial Slashers goal. Although Ruairi Clarke received a black card shortly after it didn’t take away from the win and a fisted pointed from Colin Smyth sealed a fine success for Eugene McCormack’s side.

A pointed free from full-back Barry Gilleran opened the scoring with Colin Smith registering his first point two minutes later when he hit over a free. Paddy Dowd then got the first point  for Clonguish in the 7th minute.

Points from Colin Smith (free), Brian Walsh and Robbie Clarke gave the townies a three point lead by  the 19th minute but Clonguish replied through Chris Gordon and Paddy Dowd to cut the gap to just one.

Slashers once again hit back with a free from Daniel Smith before Clonguish wing back Anthony Watters got up to score an excellent point. Another Colin Smith free gave Slashers the edge coming up to half-time but Clonguish ended the first  half well.

A point from Paddy Dowd (free) was followed by a terrific Peter Hanley point and in stoppage time Conor Shields got on the scoresheet and went close to scoring a goal as Clonguish led by 0-9 to 0-8 at the break.

Another fantastic point from Brian Walsh drew Slashers level two minutes into the second half but a free from Paddy Dowd gave Clonguish the edge once again minutes later. Every time Slashers got back in the game Clonguish were able to get back in front with the excellent Ciaran Williams being a real threat in the forward line.

Entering the final 10 minutes a wonderful point from Williams put his side two up but that was to be their last score of the game as Slashers got back into the game and then clinched the win with the introduction of Niall Mulligan and Michael Brady a great help.

Points from Brian Walsh and Colin Smith (free) drew Slashers level again in the 55th minute. Andrew Kelly then scored a fine goal and right at the end Colin Smith fisted the ball over the bar to give his side a four point winning margin and made it three wins in the group stage of the championship.

Slashers now meet old rivals Killoe in the quarter-final while it is also a difficult task for Clonguish who take on Abbeylara in the last eight.