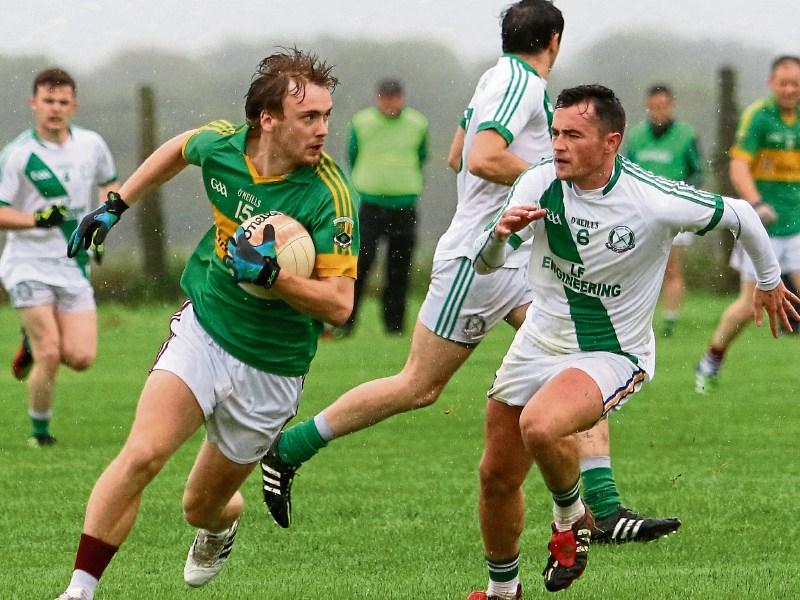 A cracking shot to the top corner of the net from Mark Rossiter late in normal time proved to be the decisive score for St Brigid’s who showed great character to survive a stern test against Ardagh/Moydow in the Intermediate Football Championship Round 3 game at Moran Park, Carrickedmond on Sunday evening last.

Unbeaten Killashee had to work extremely hard for a third win in a row that left them top of Group 1 and on course to qualify for the county Intermediate title decider for the second year in succession with Young Grattans providing the opposition in the semi-final at Pearse Park on Sunday week, September 4th.

This was an enthralling encounter played in wet and greasy conditions and St Brigid’s started the better with scores from Willie Skelly (2), Francis Dolan and Emmet Skelly, the latter landing a fantastic point from long  range.

Brilliant strikes against the wind from midfielders Seamus Shortt and Eddie Powell closed the gap before a goal from Paddy Ganley put the amalgamation ahead. The prominent Shortt then turned over the ball in the middle of the field and launched the ball inside where from the resulting break Ganley volleyed the ball to the corner of the net.

But St Brigid’s responded brilliantly to hit four of the five remaining scores in the first half to lead by the minimum of margins at the break, 0-8 to 1-4, thanks to three points from influential centre-half-forward Willie Skelly and a cracking solo effort from county minor Cillian Lee.

The intense and desperate nature of the second half made it very exciting indeed as both sides went hell for leather in their quest for a last four spot.

Both sides enjoyed good spells on the changeover and Ardagh/Moydow were looking good when three points in a row from Paddy Ganley and further scores from Shane Henry and Daryl Carrigy gave them a grip on the game.

Carrigy’s effort was the fifth unanswered point from Ardagh/Moydow since the beginning of the second half and heading into the last quarter Killashee had yet to open their second half account and appeared to be in trouble as they trailed by 1-9 to 0-8.

But four points in quick succession from Francis Dolan, Willie Skelly and Darren Carberry levelled the game and with 10 minutes to go it was all to play for.

The excellent Ganley converted two tough frees to leave Ardagh/Moydow in front again with only two minutes of normal time remaining but then the influential Darren Carberry played a brilliant ball inside to Mark Rossiter who finished excellently to put St Brigid’s back into the lead.

Further points followed from Mel Shanley and Willie Skelly to make certain of the victory for Killashee, much to the bitter disappointment of Ardagh/Moydow who are now out of the Intermediate Championship.