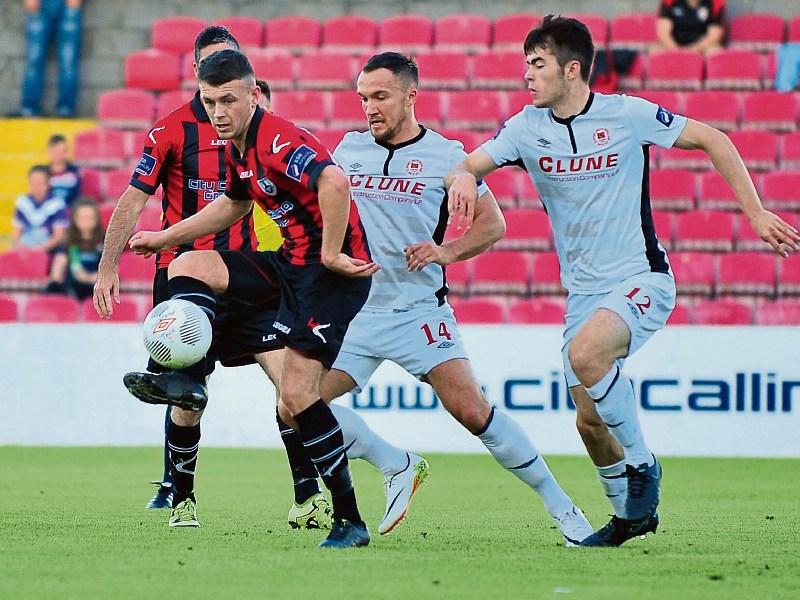 Life after Tony Cousins started with a defeat for Longford Town but it was a much improved performance against St Patrick’s Athletic in the Premier Division league game at City Calling Stadium on Monday night last.

The Town deserved to get something out of the game but were sunk when the visitors scored a late winner.  Mark Timlin’s well struck free-kick yielded the only goal in the 73rd minute as St Pat’s upped their performance in the second half.

Assistant manager Gary Cronin was caretaker boss for the Town on Monday night and he felt his side were unlucky losers: “I thought they played well and did everything that was asked of them. I thought we were better in the first half and deserved the lead and the width of a post denied us that. That would have been great for us but unfortunately it wasn’t to be. I genuinely think we deserved to get something out of the game.”

451 was the official attendance at the game against St Pat’s and although that was not much of an improvement from a home support point of view, the loyal Longford fans who were there were happy with the attitude and the effort the players produced.

Cronin said: “This season understandably the Longford fans would be frustrated and disgruntled when you look at where we are in the table and they have a right to feel like that. If we are to have any hope to be honest of avoiding relegation, then we need to stick together as a team and as a club and the supporters also have a part to play”.

In the first half where chances were scarce, the Town were the better side. Kaleem Simon came close to breaking the deadlock in the 32nd minute but his volley from Gaius Makouta’s flick on hit the post. Simon also had a goal ruled out just before the break for offside and St Pat’s didn’t create too much to trouble Town keeper Paul Skinner.

The Dublin side were a lot better in the second half with Town defender Jamie Mulhall blocking a goal attempt from Lee Desmond in the 58th minute but moments later Philip Gannon very nearly gave the home side the lead but his lob was just over the bar.

St Pat’s piled on the pressure and in the 73rd minute they took the lead through a sublime Mark Timlin free-kick after Noel Haverty had fouled Jamie McGrath and it was tough on the Town.

The visitors squandered a few chances after that to score a second goal with Timlin and Christy Fagan both guilty of glaring misses while the Town were unable to engineer a chance for the equaliser.

So what now for caretaker manager Gary Cronin? Although he hasn’t got the required PRO Licence he would love to stay at the club: “I will speak to Jim (Hanley) or he will speak to me and I’ll know what direction the club want to go with the managerial position. I have spent a lot of seasons with the club in all capacities; player, coach, assistant manager and now (caretaker) manager. I just hope whatever happens the club can turn it around, be it this season or next. If I am asked to stay on in charge for the next couple of weeks there is no problem. I want to help out this club.”

Having played under Tony Cousins and who was then part of his backroom staff, Cronin has nothing but praise for the former Town boss.  “He gave me an opportunity in coaching. I will always be grateful for that and I have learned a lot from him. I know all about the hard work he put into the job and Tony always had the best interest of Longford Town in his mind.”